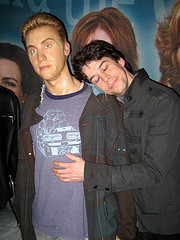 Lance Bass took a bite of the Big Apple, only to spit it right back out. NY Mag reported that the ex-'n Syncer, who is in town starring as Corny Collins in Hairspray, said he doesn't like New York too much.

“There’s a lot of pieces of crap here for a lot of money,” he says. “And I don’t think anyone here has any style. I was looking at fully furnished places and it was like, you can either have a bunch of floral prints or some dusty couch from the 1960s.”

Oh Lance, we don't care how many LVHRD events you attend - you're not making many friends in this city you "love".

In a letter to NY Mag Bass tries to take it all back, saying "I love the city and I now plan to get a permanent residence here and be bi-coastal," signing his letter as a "Proud New Yorker." On his MySpace page he writes a little more freely, saying:

"for those that read the New York mag article…I said none of those negative quotes! I expect bloggers to print fake things and its all in fun..but when a real journalist misquotes me and prints fake quotes that I said..that is just crazy!! And, I dont think legally they can do that! Can they? This dumb reporter just put words in my mouth and turned everything I said into a negative."

And on former bandmate Justin Timberlake's new restaurant, he says he does go but that “it’s really up there. The Upper East Side? I’m not in college anymore.”

Photo of "Lance" at Madame Tussauds via jase (iilgemini)'s flickr.