Kyp Malone, TV on the Radio 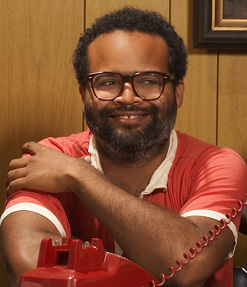 Williamsburg art rock quintet TV on the Radio has just released their third full length album, Dear Science. It's an upbeat, danceable departure from their last opus, Return to Cookie Mountain, but listen closely to the lyrics and you'll find them as troubled as ever with life under the Bush occupation. Of course, main lyricists Kyp Malone and Tunde Adebimpe are smart enough to favor the evocative over the polemical, and it continues to work for them: The verdict on Dear Science handed down from Pitchfork and other critics has been favorable indeed. They play a three night stand at the Brooklyn Masonic Temple on October 14th through 16th. We recently spoke with guitarist, singer and songwriter Kyp Malone about the album, the neighborhood and the beard.

First things first: What happened to the beard? I cut it. It'll come back. I do have a beard on my face now. It's just not long.

Was it because of the heat? You've got to keep changing things up. Also, I have an easier time eating in public. And more than one type of person finds me attractive.

So, as I understand it, Return to Cookie Mountain—which was released in the U.S. about two years ago in September 2006—was actually finished long before it was released here. So was there a long gap between when Cookie Mountain was done and when you started working on Dear Science? Yes, a very long gap. We were on tour for most of that time in between the end of recording Cookie Mountain and the beginning of working on Dear Science. Most of that time was spent on the road together. When we finished touring around this time last year we took six months off. Then we got back in the studio and started writing after that. But it's not like that was all inactivity, we just weren't spending as much time in the studio, collectively.

So is that comma in the title [the album's name was originally reported to be Dear Science,] intended to piss of punctuation nerds? I don't know that there actually is a comma in the title. There may have been at some point in the construction of the art work on the cover. The original germ of the idea comes from a note that Dave [Sitek] wrote in the studio that said, "Dear Science, please start solving problems and curing diseases or shut the fuck up." But if you just write Dear Science, and leave it more open to whatever interpretation people want to put on it, then, you know...

And beyond that, how does the song-writing process work? On this record there are songs that are collaborations between me and Dave and collaborations between Dave and Tunde and collaborations between me and Jaleel. But various songs go through various filters. On this one a lot of Tunde's songs went through the filter of Gerard and Jaleel. And I would put in my two cents but I feel confident they can hear what Tunde was trying to articulate. And I like writing with Dave because we can do stuff really quickly and it's exciting to work that way sometimes. And some songs I wrote in my bedroom and filled in some of the instrumentation and brought it to the studio and watched it get rearranged and rearranged and reinterpreted a bunch of times before people hear it on the record.

What was the song you had the hardest time getting to where you wanted it? For me, maybe Golden Age. Or maybe just because of timing and the amount of people I wanted involved maybe Lover's Day. But I feel happy and excited about the record as a finished idea, more so than I have than anything I've done with this group of people before.

Can you elaborate on what that idea is for you? I say idea instead of product because I don't want to use that language anymore, even though it is something that was produced by us. But it falls too much into the world of commerce, and I know that's the world we live in but it's not the world we create in, fortunately. And it's broader than a specific idea. Fortunately, I'm working in a medium that is super expansive and allows for any number of ideas to come in. I feel like this is a fairly expansive record; that's my perspective on it. I can only speak for myself, and for me I feel it's very expansive and I'm very proud of all my friends and myself on this one. I don't know if it'll stay that way and I'll get a different view on it and say, "That could be better, that could be better."

Return to Cookie Mountain seemed evocative of the dire mood that's prevailed under the Bush administration. Lyrically the new album seems just as provocative and relevant as ever, but musically it's more upbeat. Is that something you hear also and is that intentional? I hear that and I think it was intentional. You know, it gets kind of tiresome being dark and brooding. I know what you're talking about when you say that, but I've been listening to music like that since I was a kid and often the purpose of that music for me was not to feel bad or that I wanted people to feel bad about the world. When I listened to music that had that element growing up it was because it was comforting to me and it made me feel as if I wasn't alone in the world and other people recognized the things that were contributing to my angst and alienation. But I also know there's a spectrum of emotion and feeling that is possible for us that's a lot wider than happy or sad, you know? Within a ten or eleven song record there's a lot of opportunity to explore different emotional landscape. And we wanted some upbeat fun stuff to work with this time.

There's a lot of brass on some of the songs on this. Are you going to have that instrumentation on tour? I think we might have some. It depends on where we're playing. There's a wide community of musicians who get a hold of the charts and are eager to play. I remember playing somewhere in England, I think, and this kid got me called from the back of the club and he had a horn section that he basically just put together and they had the charts for our music and they just wanted to sit in. And they did it! It could have benefited from more practice with all of us but overall they did a really good job, you know? It's a really exciting thing when you get to play with people all over the world you don't expect.

I see you around Brooklyn a lot, from Williamsburg to Greenpoint. Is it hard for you to go about your business living among so many indie rock nerds? I cut my hair and that makes it a hell of a lot easier not to be the Mickey Mouse anymore. But I don't want to not be able to live the way I live, you know, that doesn't sound like any sort of fun to me. Everyone I know takes the back route sometimes because they don't want to talk to everyone, you know? It's awesome and I like living in New York and when they finally push all the Bohemia out of Williamsburg—which they're in the process of doing, I don't know if you noticed. There's less and less fun as we make it and more and more fun as it's dictated.

There was just something last Friday night. I saw these helicopters and wondered what the hell is that? The Pandamonium, yeah. They said you weren't allowed to have fun and they have guns and the state behind them. Which is politically "us" behind them, but it's not us.

So once it's become unbearably gentrified do you have some other places in mind to move to? I do, but I'm not going to say them in the media. [Laughs.] I've just seen the process happen so many times, you know? You have different realtors and other people say, "What do you expect? You're part of the process of gentrification. And people like you. You go into places and change the cultural climate and make it attractive for commerce." You know? And I would take that criticism if I lived in a place where there was any money spent on the arts. If I lived in Canada I could take that criticism. But I can't take that criticism in America. We don't support the arts. That's not where the money goes. I don't know or care whether it's good or bad but it's not where the money goes.

So as long as there are ghettos that's where people who do creative work are going to go because that's where they can fucking afford to go. And the more people who are doing like things and creating their scene and making their world the way they want it to be, that unfortunately makes it attractive for brunch life, you know? There are people who are working on this, there's a book called The Rise of the Creative Class and there's a woman who wrote a book called The Warhol Economy, Elizabeth Currid and there are people who are trying to look at it in a more sustainable way. But for now "the way" is that you can have your parties and you can have your warehouses and speakeasies and Kokie's and The Stinger Bar and all these things only until there's actual money at stake. And then you've got to go. Find the next ghetto.

In 2004 you told us that Punjabi is your favorite place to eat. Does that still stand? [Laughs.] That does not still stand. Although I did like it a lot and I still do. I have a soft spot and I'm trying to take better care of myself. My kitchen is my favorite place to eat. But I really like what Mark and Andrew and all the people who've worked with them over the years have done with Marlow & Sons and Diner. It's definitely a special occasion place -- or it should be for me if I want to be responsible financially. But Marlow & Sons really have it figured out. They're really doing something delicious over there. Maybe it's all the butter. I don't know.