Reader Rishi D. sent us this picture of The Kool-Aid Man balloon stumbling on Central Park West. Don't worry, folks—The Kool-Aid Man got back up quickly (it's no 2005 M&M balloons-hitting-street-lamp-into-people or 1997 Cat in the Hat-into-street-lamp incident). But more fun: Japanese pop artist Takashi Murakami, whose Kaikai and Kiki are new balloons in the parade, will be marching, too! 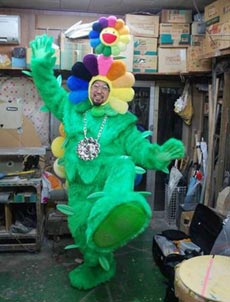 Takashi Murakami in his parade outfit

The parade has previously had balloons from Tom Otterness (Humpty Dumpty), Jeff Koons (Silver Bunny) and a Keith Haring figure, but this year, Murakami said he wanted to contribute. According to the NY Times, the Macy's parade studio was worried "whether the balloonified characters, with their gigantic heads and teeny-tiny limbs, would be able to achieve what he called free lift — meaning, [studio VP John] Piper said, 'that there’s enough helium inside the balloon to not only compensate for its weight but to make it fly.'" And the parade's executive producer Robin Hall said, "There are details about them that, I think in isolation, as they’re described, sound kind of grotesque... [But] the final thing is not so bad."

Murakami said, "They are cute yet fearsome. modern and yet connected to the past. They embody eccentric beauty." And if you see a guy in a green flower outfit with the balloons, it's probably him!