Koch Brothers Get Their Own LES Mural, Created By A Prisoner

The two artists responsible for illegally installing a giant bust of Edward Snowden in Fort Greene Park last spring have created a new political piece, and this time, rather than commemorate a big data whistleblower, they're skewering two powerful planet-killing plutocrats. Andrew Tider and Jeff Greenspan unveiled a mural of David and Charles Koch, a.k.a. the Koch brothers, on a Lower East Side wall Monday morning.

The image of the two corporate energy barons comes from The Captured Project, Tider and Greenspan's artistic protest against the corporate honchos whose company has brazenly flouted the law while "destroying our economy, environment, and society." Tider and Greenspan commissioned the portraits to be painted by prison inmates, as part of a series they describe as "People In Prison Drawing People Who Should Be."

"The Koch Brothers use their money and power and influence," Tider said. "You take a look at what they really do with it, and you can just tell that in 50 years time people will look back and see that they were on the wrong side of history. These guys use their money to deceive people about climate change, and they don't do it in an open way—they do it through secret organizations." 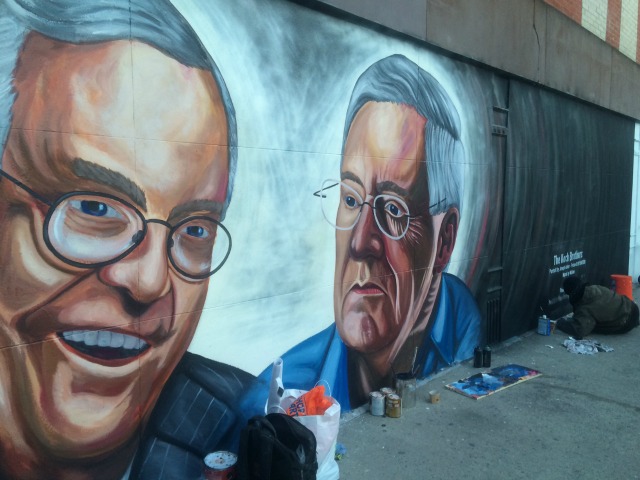 Tider and Greenspan worked with the LISA Project, a street art nonprofit, to secure the wall space at the intersection of Rivington and Suffolk, and then enlisted Willow to complete the piece. Tider described the process as a careful artistic handoff: the original Koch Brothers portrait was painted by Joseph Acker, an inmate at Oregon's Snake River Correctional currently serving a 10 year sentence on charges related to identity theft. Willow created a wall projection of Acker's work in his studio, then covered it with paper that was eventually cut into the outline of the finished mural. 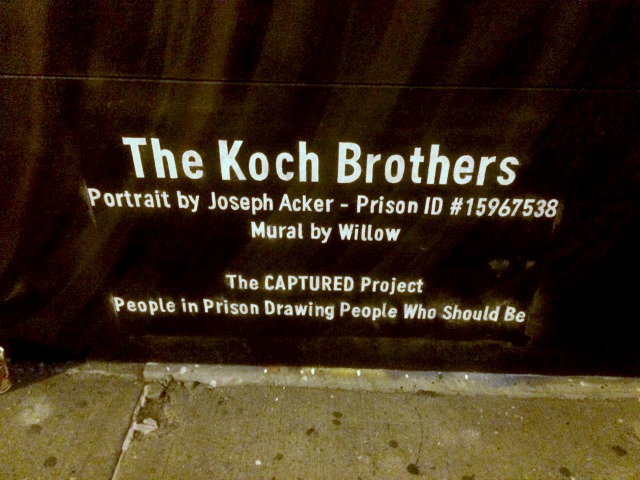 Tider described the idea: "Let's not just make a portrait of these guys, let's make it as close to this inmate's vision as possible. As if he painted it himself."

Willow completed the mural at about 6:30 p.m. last night after two and a half days of work. "It was interesting to watch people as it was taking shape pass by and realize it was the Koch brothers and be confused as to why they were on the LES," Greenspan said. "David [Koch] was manifested by last night and nobody fucked with it, attacked it, threw anything in his face. Or burned the building down."

A limited-run book containing all of the portraits from the Captured Project has already sold out, and the work has garnered Greenspan and Tider a new level of artistic fame. The two men are donating all the book's profits to the organizations supporting Democratic presidential candidate Bernie Sanders. "We didn't want to just quote-unquote 'raise awareness,' we wanted to do something that would have a measurable effect," they said.

As for the ultimate fate of the Koch brothers' mural, death is certain. The building it's been painted on, located at 177 Suffolk Street, is slated for demolition later this year, and the LISA Project has confirmed that no new projects will go up on its wall. And so at some point in the near future, these faces of Capitalist greed and big money politics will be blasted to pieces. Tider and Greenspan can't wait to watch it happen.

#Andrew Tider
#Jeff Greenspan
#Koch Brothers
#The Captured Project
#The LISA Project
#Willow
#original
Do you know the scoop? Comment below or Send us a Tip