Knicks Power Rankings: On Pace To Be The Worst

That's worse than the Isiah teams, worse than the Larry Brown team, worse than the team that lost on purpose for a chance to draft Patrick Ewing. Things might improve a bit but with just four wins in eighteen games, this year's Knicks may as well forget about anything other than the draft lottery. As Casey Stengel once said about another team in orange and blue that couldn't do anything right: "can't anyone here play this game?" Kind of, maybe, yeah, no.

1. Amar'e Stoudemire Oh to go back to the heady days of 2010-11, when Amar'e and Raymond Felton pick-and-rolled the Knicks to a 42 win season and a trip to the playoffs. Stoudemire isn't as good as he was then but he's having a solid season nonetheless. In a week that saw the Knicks play two games without Carmelo Anthony, STAT was out there playing his hardest, just as he has all season.

He recovered from a quiet game against the Mavericks to be the lone bright spot in the team's pitiful loss to Serge Ibaka and the Thunder in OKC as he put up twenty and nine in just under 26 minutes. He followed that up with nineteen and twelve against the Heat that included a tip-in with 1:24 left that made it a two point game and gave the Knicks a chance to steal a win (those were the last points they would score). He also made pretty strong comments about the team's effort level. He was right about everything he said.

2. Jose Calderon Calderon has only played five games and has showed some rust but he ranks this high because he played a masterful game against his former team in Dallas. Calderon made seven of his nine three point attempts and somehow grabbed ten rebounds in the Knicks' best road performance since they beat Lebron and the Cavs in Cleveland during the first week of the season (they haven't won on the road since). 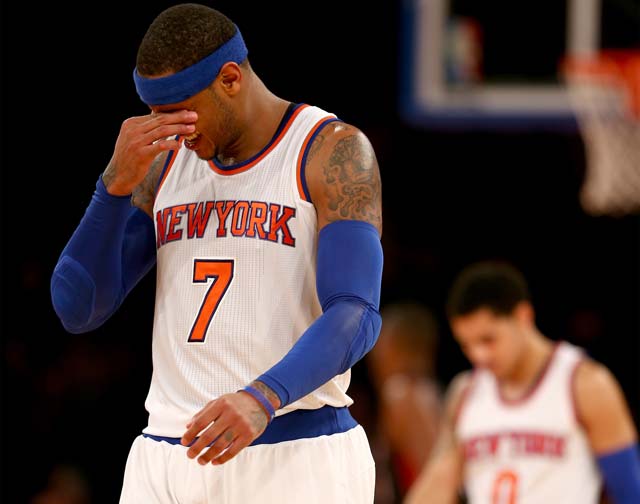 3. Carmelo Anthony Melo missed both the Dallas and OKC games with back spasms that started against Houston last Monday but returned to the lineup with a pretty good performance against the Heat, scoring 31 points. They'll need him healthy if they want to come close to last season's 37 wins.

4. Shane Larkin It's here that the Knicks roster starts to fall apart. If there were some high quality role players dotting the rest of this list, the Knicks would be a playoff team. They aren't. Larkin showed flashes again this week, especially now that he plays with another point guard.

5. Pablo Prigioni Moments of professionalism and an understanding of how the game is played will keep Pablo here throughout the season, even if he is in and out of Derek Fisher's rotation.

6. Derek Fisher In the NBA, talent wins; the Knicks roster is bad enough that it's difficult to get a sense of whether Coach Fish is doing a good job or not. But it does seem like he has yet to find his legs. He hasn't experimented nearly enough with going small, hasn't found a way to get production out of the shooting guard position (see below) and has constantly shuffled his rotations in a way that has probably made it difficult for players on the fringe to get comfortable. He doesn't look lost, however, and no one, not Red Holzman, Red Auerbach or anyone else named Red could coach this team to the playoffs.

7. Samuel Dalembert Dalembert has good games and he has bad games. There are stretches where he's blocking shots and getting putbacks and protecting the middle and there are stretches where he literally (really, literally) can't catch the ball. The first half against Miami was one of those bumbling stretches, forcing Fisher to start Stoudemire in the second half. And he was thoroughly dominated by the man he replaced as Tyson Chandler pounded the Knicks to the tune of seventeen points and 25 rebounds, although he did have thirteen of each himself. 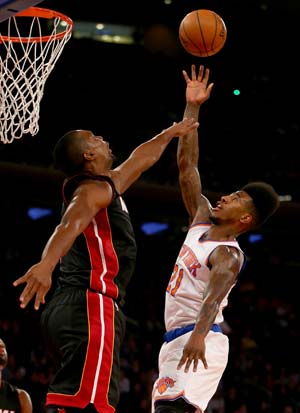 Iman Shumpert has long tantalized Knicks fans with his potential and had his offensive inconsistency excused by the fact that he'd only played for Mike D'Antoni and Mike Woodson and that he's battled injuries. Shumpert's healthy now and is on his third coach and he's still an incredibly inconsistent offensive player who struggles to score.

On defense, he's constantly in foul trouble and it's fair to call his reputation as a stopper into question. In fact, it's fair to take his reputation as a stopper, douse it with lighter fluid, burn it, sweep up the ashes and throw them in one of our local rivers. Shumpert, who shot 30% this week, surrendered 32 points, eight rebounds and seven assists in less than 24 minutes to Russell Westbrook in Westbrook's first game back after missing fourteen games due to a broken hand and then 27, five and five to Dwyane Wade in his first game back after missing seven games with a hamstring issue (Wade also scored ten points in the fourth quarter).

Not all those points were scored on him and defense is played by teams not individuals but a lot of it is on him. Defensive stoppers at the shooting guard position need to actually be defensive stoppers or they don't justify their playing time. Let's all stop pretending Iman Shumpert is Tony Allen when he's not even Avery Bradley. The Knicks declined to extend his contract this off-season, putting off any decision on bringing Shumpert back until after the season and thus far it looks like they made the right decision.

JR Smith's minutes are down from last season along with his statistics, both on a per game basis and per 36 minutes on the floor. On a nightly basis, he's averaging less than ten points and is shooting about 28% from three and 40% from the field. He went 1-8 from downtown against the Mavericks and 1-9 overall against Oklahoma City. He's played badly enough that he may or may not have been benched following a defensive lapse during the second quarter agains the Heat. One way or another, he deserved to be.

Tim Hardaway hasn't done anything to get himself out of Derek Fisher's doghouse and might not get the chance to this year. At this point, Fisher should give him a chance to play his way out of it because nothing else is working at the position and with the Knicks struggling mightily to score they could use his shooting, assuming he didn't lose that his talent in that area over the summer.

When the season started, shooting guard was considered a position of relative strength for the Knicks. It wasn't clear that they'd be able to find minutes for all three guys and it seemed that trading one would be the only reasonable option. Now they're playing point guard Shane Larkin at the position and would be lucky to get something of value in exchange for any of the three.

The Knicks spend some time at home this week as they take on the Nets tonight followed by a Cavs team that will no doubt have revenge on its mind on Thursday. After that they'll play the Hornets in Charlotte and return home to face the Blazers Sunday. With four games in six nights, they'll be lucky to get one win.