After beating the Nuggets to snap a seven game losing streak at the end of last week, this was supposed to be a stretch in which the Knicks clawed back to respectability. Instead, they suffered losses to the Bucks (117-113) and Timberwolves (115-99), managed to beat the tanking Sixers (91-83) and lost to the Dwight Howard-less Rockets last night (91-86). The Knicks are 4-11 and are better than very few teams. And so another week of "whose fault is it" must be played.

1. Carmelo Anthony Anthony is far and away the Knicks' best player and will occupy this spot for as long as he's in the lineup. Even his presence there has been tenuous, however, as he's been dealing with a sore knee and now back spasms that forced him to leave last night's game with Houston in the second quarter.

Anthony is averaging 23.2 points a game and is shooting slightly better this season than last. But his free throw and three point attempts are down, mainly due to the work in progress that is adjusting to the triangle offense, making him far less efficient. And his play hasn't done anything to make his teammates better. Absent any other leadership, they seem to have taken on his casual style of play and often appear to not be trying hard enough. It probably isn't fair to pin the team's effort on Anthony but as the face of the franchise some of the responsibility is his.

2. Amar'e Stoudemire Over the week's four games Stoudemire averaged 14.3 points on 72% shooting and 6.8 rebounds in 22.5 minutes. That's impressive production. And no, he still can't play defense. He will never be able to play defense.

Iman Shumpert After a fantastic 9-14, 21-point performance in a tight loss to the Bucks in Milwaukee in which he did this:

Shumpert struggled in Minnesota. He shot just 1-11 from the field and surrendered 37 points to opposing shooting guard Kevin Martin. That in and of itself would be embarrassing but it was made even worse when it was revealed that Martin scored 34 of the points after breaking his wrist midway through the first quarter. Shumpert's regression continued as the week went on, culminating with a 2-10, seven-point performance against the Rockets in which James Harden hung 36 points on him (among others). Shumpert reaches too much on defense, is constantly in foul trouble and is settling into the same kind of offensive inconsistency that has plagued him throughout his career. But he plays with energy and effort and has had some good games this season.

4. JR Smith Smith is the Knicks' second most talented wing player. He averaged six points on 36% shooting this week and called the team's effort into question. At least he was right about something. He lands here because of that.

5. Shane Larkin After contributing little at the start of the week Larkin took a "Did Not Play-Coaches Decision" in Jose Calderon's return to the lineup against the Sixers. Against Houston, however, Derek Fisher used Larkin as the second point guard in a two PG lineup after Carmelo left the game with back spasms. Freed from primary ballhandling duties, Larkin brought the kind of energy and playmaking on both ends of the floor that the Knicks have been missing. His play in the third quarter kept the Knicks in it. He finished with eight points on 4-5 shooting.

6. Pablo Prigioni Prigioni isn't a game changer but occasional stretches of professionalism and craftiness make him a breath of fresh air. He and Larkin were a real pain for the Rockets when they played together in the second half.

7. Jose Calderon It's a run on point guards. Calderon returned from a strained calf to play his first game against the Sixers on Saturday night and looked incredibly rusty, shooting 1-6. He looked a bit better against Houston but was still far from the player the Knicks need him to be (they need him to be Lebron James but they'll settle for a ballhandling shooter who helps them with offensive flow and spacing). There's no reason to worry yet. Calderon comes in seventh based on potential.

8. Samuel Dalembert Starting center Samuel Dalembert is a pretty solid defensive player but it's become clear he isn't capable of moving the needle for this team. The Knicks are much better when he's playing than when he isn't because the big men behind him on this list can't play defense at all. Defense is important. 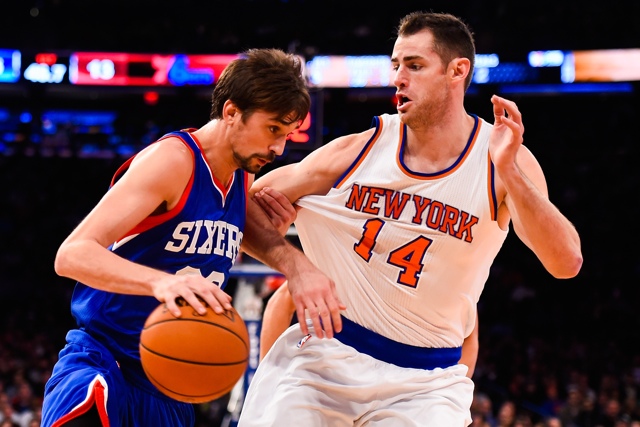 9. Jason Smith Smith is ranked so that his defense can be insulted. He is an absolutely terrible defensive player. The Knicks give up 112 points per 100 possessions with Smith on the court and 105 points per 100 possessions with him off of it. Having to play him is killing the Knicks but they don't have a lot of other places to turn. Andrea Bargnani may actually be an upgrade.

10. Tim Hardaway Hardaway is ranked so that his overall play can be insulted. He's an atrocious defender who hasn't shown an understanding of even the most basic principles on that end. He had his best game of the season Tuesday night in Milwaukee, going 9-14 for 24 points in the loss, for which he deserves credit. And it is fair to criticize Coach Fisher for yo-yoing his minutes and perhaps preventing him from getting into a rhythm. But Hardaway hasn't played with any consistency, as evidenced by his flat performance against Minnesota the next night (2-5 in in 22 minutes) and his shooting (42%) hasn't been good enough to balance out his defense.

The Knicks take on former teammate/current arch-rival Tyson Chandler and the Mavericks in Dallas tomorrow followed by a visit to Oklahoma City to play the Durant-and-Westbrook-less Thunder. After that they return home to host the Heat and Nets. There are no easy games for the Knicks.