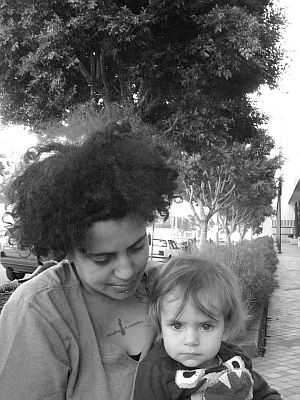 Kimya Dawson is best known for her collaboration with Adam Green in The Moldy Peaches, an oft-cited instigator of the anti-folk scene, which seeks to extract the self-seriousness of 60s folk while keeping the earnestness and emotion. Since the duo went on hiatus in 2004, Dawson has been busy cutting intimate, lo-fi solo albums, touring and raising a family (pictured). Some of her songs will be familiar to those who’ve seen the indie sleeper hit Juno; she contributed much of the soundtrack. Dawson plays at Soundfix tonight and Greenpoint’s Europa on Wednesday night.

How did the Juno soundtrack gig come about? Well, Ellen Page told Jason Reitman that she thought Juno would listen to The Moldy Peaches. He downloaded a song and loved it. He then asked for my solo CDs and decided that was the sound he wanted for the film.

On your website you shared an intention to befriend Danny Devito at the Juno premiere. How'd that go? He wasn't there. Too bad for me!

What's the biggest compliment you've received for your music? It always feels good when I hear that my songs helped people through tough times.

What's been the biggest challenge to overcome with your career? Playing for more and more people while maintaining the intimacy and sense of community that makes my shows so special.

What's it like traveling and touring so much now that you're a mom? Just like it was before but with the best little buddy along for the ride. I have been playing all ages/non-smoking shows for a few years now, so things didn't have to change too much. We just have to be extra sure that the places we stay are safe.

If you're losing money on tour because you're staying in hotels to be child-safe, does that mean less touring in the future? We aren't always staying in hotels. And it turns out that we aren't actually losing money. I had thought we might, but it's been okay. We actually have some crazy tour plans in the works.

You were just in New Orleans. Impressions? It was incredible and heartbreaking and inspiring. The people there are one of a kind. The culture is so rich and so valuable and they need so much help still. I cried and cried when we were on a tour of the city and got a good look at the most devastated areas. Unreal. I was with a group called Sweet Home New Orleans. Good, good people.

There's something on your website about "painting bags" and selling them. I have an etsy store and i sell tote bags and other crafts, as I make them.

Please share a surprising or weird or moving interaction you've had with a fan of your music. A couple years ago I got an email from a girl just ripping one of my songs apart. It was a very personal, serious song, so I figured for it to bother her so much she must've been going through some shit. So I asked all my blog readers to write to her and tell her they loved her. At first she was really annoyed but then she caved in and admitted she had been having a rough time and it felt good to be showered with affection. We are still in touch.

If you weren't a musician and songwriter what do you think you'd be doing? I can't even imagine. Before I figured out how to make myself feel better by writing songs I was a very depressed self destructive person. Without music I might be dead.

This Village Voice blog
said you'll be on Conan O'Brien with Adam, but your Livejournal says otherwise. What's the status on that? Well, we said yes initially because I didn't realize what the situation still was with the strike. Then John Darnielle emailed me and told me what the deal was with Conan being forced back on and when I realized that no agreement had been reached with the writers, I cancelled.

So a one-off Moldy Peaches reunion for TV was arranged, but no tour or other gigs. Why not? I am not interested in doing that stuff right now. I feel pretty removed from those days and those songs. I'll always love that stuff, but playing together just because of Juno feels like a digression. It's been so many years. (And I hate not playing guitar).

Advice for young musicians starting out? Play for you. Make music that is important to you. Then if other people aren't into it at least it means something to you. And don't play with lofty expectations. Start your own communities. Set us shows in your town. Don't wait around for people to "discover" you. Just play. Have fun now. Don't worry about the future. That is such a waste. There is so much good stuff all around, every day.

What's your favorite restaurant in New York? It used to be Alice's on Ave. A. The borscht made me cry it was so good. Now it's, you know, that one Indian place. The one with all the lights.

Where did you play your first gig in New York and how did it go? The first Moldy Peaches NYC show was at Sidewalk Cafe and so was my first solo show. That was a good place for starting out.

What's your favorite venue to perform in in New York? I like the Bowery Ballroom but I wish they did all ages shows. Everyone at Southpaw is super nice. That's a good one. I have played a couple of punk shows in Brooklyn at people's places that were way better than shows I have played at any venue in town.

Do you miss New York at all since returning to Washington?
Since 1991 I have gone back and forth between New York and Washington. I hate the rainy season out there, but I like the fact that people in Washington aren't doing music as much to be seen as in New York. The intention is more pure.