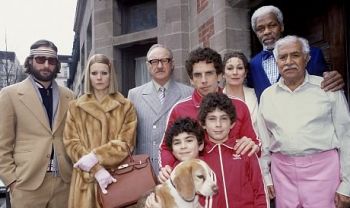 The Observer, keeping with their trend-watching, is reporting that 20-somethings are moving back in with their parents after college...that is, if the parents own prime New York real estate (aka: Brownstone Boomers). Didn't we all see this coming with The Royal Tenenbaums?

One Carroll Gardens family, the Eisenbergs, have seen their three daughters return for varying amounts of time -- they are, of course, just one small section of a new generation of kids returning to the nest nationwide. As opposed to some other places in the county, however, they get rent-free living in expensive, "hip" neighborhoods.

A few factors drive this phenomenon. The Brooklyn neighborhoods where these graduates grew up have become hip places to live, and rents there and throughout New York City have skyrocketed. “Another important thing, I think, is that the clash in values between parents and their grown children is not as extreme as it once was,” Rusti [Eisenberg[] said.

One of the Eisenberg flock even brought her boyfriend home to live in the Henry Street home for three years! For the most part this is a strategy to save money and buy a room of one's own someday, one 20-something interviewed in the article pointed out that, “The amount I saved while living at home was enough for a down payment on an apartment" (a studio in along Prospect Park West for $130,000 in 2002, sold in 2006 for double that amount).

#20-somethings
#brooklyn
#brownstone
#Brownstone Boomers
#carroll gardens
#parents
#rent
#The Royal Tenenbaums
Do you know the scoop? Comment below or Send us a Tip