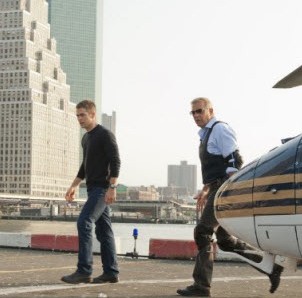 Kevin Costner and Chris Pine are filming scenes for Jack Ryan in Lower Manhattan this weekend, specifically around Front Street and Maiden Lane. The alert we received noted that they will be filming high speed chases and stunts, as well as simulated police action and a terrorist attack.

The movie will follow a young covert CIA analyst who uncovers a Russian plot to crash the U.S. economy with a terrorist attack.

This isn't the first time a too close to home scene has been filmed near the site of the September 11th attacks. During filming of The Dark Knight Rises, many scenes were shot in the area for fight scenes that included tanks, riot gear, and mass amounts of people.

Anyway, just Hollywood. All you need to worry about are the street closures today and tomorrow.