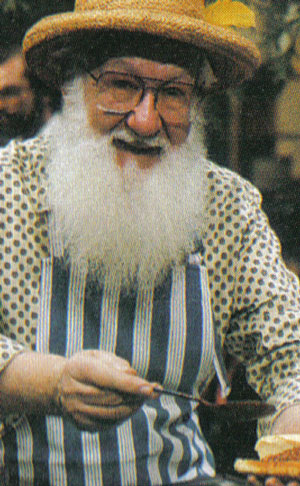 The creator of Big Bird and Snuffleupagus, Kermit Love, died at the age of 91 this past Saturday from congestive heart failure; he was in Poughkeepsie, close to where he lived with his long-time partner Christopher Lyall. Though many rumored Kermit the Frog was named after him, the character was created long before Love began his career.

While Love is best known for his work with Jim Henson, he also spun his costume design magic for television and stage productions, as well as renowned choreographers, including Twyla Tharp and Agnes de Mille. Yet the furry and feathered creatures will be his legacy, and The NY Times takes a look inside everyone's favorite forever young bird, which he helped create:

Mr. Henson, the creator of “Sesame Street,” who died in 1990, did the original sketches of Big Bird. Mr. Love built the bird, with its manhole-sized orange foam feet. He added feathers (with some designed to fall off) to make the creature cuter. Inside, Mr. Spinney controlled Big Bird’s mouth with his hand and the eyes with a lever attached to his pinky finger. A television monitor inside the puppet allowed Mr. Spinney to see the set.

The AP recently looked even further under the suit, at Caroll Spinney, and you can watch that video here. After a year in the suit, Spinney nearly left New York saying he couldn't afford it anymore, but Love urged him to stay -- and the next week Big Bird was on the cover of Time magazine.

Love also made appearances on the show, he played Willy the Hot Dog Man, sporadically showing up on screen between the 1970s and 90s. Willy wore a yellow feather in his hat (pictured), a tribute from Love to his beloved bird. Off-set he helped create Oscar the Grouch, Cookie Monster and others, including characters for 22 foreign versions of Sesame Street.