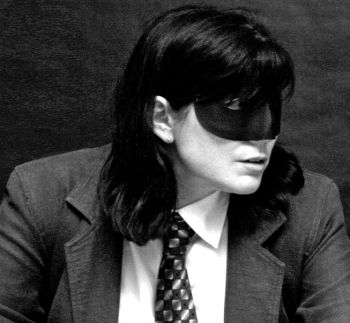 Not since Jacob took the birthright of his older brother Esau back in the Old Testament has a younger twin grabbed a bigger chunk of the spotlight than Kim Deal has over her sister Kelley throughout the years. However, Kelley is no slouch on her own. She has just written her first knitting book that will be released this fall, titled "Bags That Rock: Knitting on the Road with Kelley Deal." And of course, she has been the lead guitarist in the Deal sisters' band The Breeders for almost all of the nearly twenty years since they released their first album, Pod.

The Breeders latest album, Mountain Battles, came out this spring to the usual warm reception that the indie darling twins have gotten used to over the years. The tour that followed saw the band generating set lists that always included the 90s alternative hits "Cannonball" and "Divine Hammer," but also managed to work in songs from the sister's lesser known solo projects, Kim's Amps and Kelley's Kelley Deal 6000. The Boston Herald recently said: "Of all the really good bands in the world, The Breeders are technically one of the sloppiest." Fans relish in that sloppiness, which is really more of an endearing looseness that carries over to the always charming and sometimes hilarious onstage rapport between the two sisters. This Sunday they bring their sister act to the free McCarren Pool Party.

Are you guys excited about the upcoming show at the McCarren Pool? The Breeders seem like a natural fit for the Pool Parties. Well, we do have the album Last Splash. And you know what a Cannonball is, right? But there's no water, is there? It seems like it would be hot.

I like to read the New York Times, so I saw a pictures of the Hold Steady show there last week. Why are they closing it.

I think the city wants to turn it back into a pool. And yes, it does get pretty hot. Plus, it's been about 90 degrees and muggy in New York all week. Yeah, it's pretty bad (in Dayton). You walk outside and it's just wet right away.

Do you have a favorite New York memory? Not really. I just remember doing a lot of drugs there. Sorry. I don't know if that's appropriate or not. I just have a lot of drug memories. Did that there. Ran there. Got away from that guy there. (Laughing) God, that's really it. I've never been to the Statue of Liberty. I've never done anything cool in New York. I think I did go to Central Park. I've never gone to MoMA. I've really never done anything cool in New York.

You just moved back home to Dayton after living in LA for a while. How does it feel to be back home? It's really nice. It's great to be here. It's easy to be here. You leave for a few months and you get home, you get in your car, and the store is two minutes away. There's no traffic. It's easy here. It's great to see my Mom and Dad because my Mom has the Alzheimer's. So it's great to help my Dad and just to be around someone who's sane to talk to, who's not asking the same question over and over. So that's all really nice. On the other hand, it's Dayton. It's pretty boring and it gets cold in the winter.

It seems like you and Kim going on the road together for so long might be tough. Was the Breeders tour in the spring your guys' first time away since your mom got sick? Well, Kim did Pixies touring and I went with her as a companion. Sort of like the Agatha Christie novel, Murder on the Orient Express. Where they had the Grand Dame and they had the woman who sits and reads to her and knits for her. That's what I did. Isn't that a great visual?

Have you been reading anything good on this last Breeders tour? Yeah, I've been really into reading lately...and it's kind of strange stuff. I'm usually into non-fiction, but I've been getting back into fiction lately. Especially being on the road and it's hot and you're in the airport or the airplane. I don't really wanna learn anything right now. Just take me somewhere else. I've been reading Sharp Teeth. It's a novel about werewolves, but it's written in poetry sort of. I've been reading that book and I keep thinking about Mongo, our bass player. I used him as the lead character in my mind. I haven't told him that. It's based in East Los Angeles. So Mando, who is from East Los Angeles and is Latino, he's the perfect character in my mind for that book.

Who's a bigger trouble maker, you or Kim? Kim

Did you follow the stir Kim caused a few months ago where she called Stephen Malkmus a bitch? I was reading the magazines and Kim would point out (Malkmus insulting her and The Breeders) and I'd be like, "What the fuck?" There were three or four things in a row like that over a period of two years. He'd come out and he's getting in these digs. And I think Kim's point was, "If you wanna do that, I can do that too." Why would you wanna do that? When Kim does shit like that, it's actually funny. If I said something like that, it would just be mean.

What's the strangest context you've heard "Cannonball" in? Lethal DIzzle, this English rapper, had asked to use it. So about a year ago, he had sent in a request to use it. His record company shared the song and asked if it was cool. And we were like, "No thanks." It's sped up fast--the whole song--and he raps over it. And it's kind of like, I found that was a weird context. I just thought it was funny that here's this song that you sweat over, you figure out the chords, you record it, you pay for a video. And now here, why don't you just take the song in its entirety without changing a note? Turn up the pitch speed so it goes fast, and then you rap on it. You just rap right over it. It doesn't matter what you're saying. Now you take that and you sell it. Ya know? Lame.

So after we denied him using it, he performed it in Austin at South by Southwest and he called us out. He said, "These guys didn't want the song out. I think they're from around here." Cause he's English. He doesn't know that Ohio is nowhere near Texas. That cracks me up. They know New York and Los Angeles.

At this point, The Breeders are a pretty groundbreaking act. There aren't many pairs of sisters, let alone twins, who have played rock clubs for as long as you have. Well there's Tegan and Sara, but they're younger. We met them. We all talked at the same time all the time. And everybody understood everything that everybody else was saying.

Did you and Kim have bunk beds growing up? No, we didn't. That sounds like fun. But now we have tour buses and they're like a bunk bed.

Did you two ever pull any twin antics as kids? I used to play drums in Band and Kim played sax. In the band room once, she got up there and did the drums and I did the sax. Everybody in the room, all of our friends, were in on it. The teacher didn't know. Oh God, our friends got such a kick out of it. It was cute.

#interview
#kelley deal
#kim deal
#McCarren Park Pool
#Music
#the breeders
Do you know the scoop? Send us a Tip