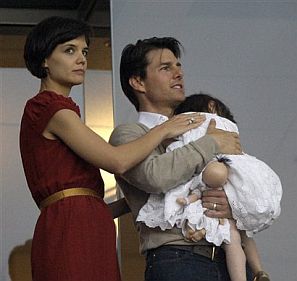 All My Sons, Arthur Miller’s tragedy about wartime profiteering, will be coming to an undetermined theater on Broadway at an unspecified date this fall. But nothing generates more buzz than when a Hollywood celebrity joins the cast – in this case that boldfaced name is Katie Holmes, who will try to inject a little integrity into her career by performing live onstage, just out of reach of her Scientology "chaperone."

This year’s been tough on Holmes’s thetan; her last movie, Mad Money, flopped, and NY Post film critic (and total SP) Kyle Smith wrote that Holmes “looks terrible and acts worse, unless this movie is unintentionally a lobotomy documentary. Whatever could have happened to her in the last couple of years to zap the talent out of her like this?” Yes, what could it be?