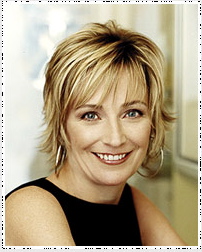 Kate White lives a double life. As Editor in Chief of Cosmopolitan magazine, she privy's girls nationwide on how to catch the man of their dreams in under five minutes while buying the perfect shade of lip gloss. As a modern day caper novelist, she reminds us all that Nancy Drew is alive, well and possibly living in New York. Her series of books

focuses on fictional character Bailey Weggins - a gossip rag writer with a penchant for solving crime. We're garnering that White herself falls somewhere between the Cosmo girl and the crime solver.

Your series of caper novels involves a gossip reporter in New York solving crimes. Which real world gossip rag reporter would you wager has the instincts to solve similar crimes?
Perez Hilton

Do you ever pull inspiration from real headlines?
Absolutely. I also eavesdrop constantly in elevators and restaurants.

As Editor in Chief at Cosmopolitan magazine, can you tell us what's the most important accessory for this summer in New York?
I’d say a tie between the white Chloe sunglasses and a metallic handbag.

Are there any tips for women left that Cosmo hasn't reported on?
How to totally understand the male brain—because total understanding is not possible.

How has the "Cosmo Girl" changed since Helen Gurley Brown led the good ship glossy?
Today Cosmo girls are the fun fearless females they may have only imagined themselves being back in the 60’s and 70’s.

Please share your strangest "only in New York" story.
I was walking down a street in the east 90’s and I saw two young Hispanic guys tugging at the shopping bag of an older woman. Assuming she was being mugged, I ran across the street yelling for them to stop. But then the two guys turned around and they were both wearing aprons—they worked at a nearby supermarket. And they said she had shoplifted from their store and they had chased her out to get the stuff back. I was fascinated by the optical illusion. I used it in my latest mystery.

Which New Yorker do you most admire?
Every firefighter.

Given the opportunity, how would you change New York?
I’d love to see fewer rats on my block and everywhere else. My son saw a raccoon one night on Park Avenue carrying a rat in its mouth. That’s not a sight I’d mind terribly in the country but it’s pretty ugly here!

Under what circumstance have you thought about leaving New York?
Only in an urn.

Do you have a favorite New York celebrity sighting or encounter?
I once came out of my eye doctor’s office and Bill Cosby was in the waiting room. He was very funny and made me laugh. I was so flustered that I walked into a wash closet instead of out out the front door. He found that hysterical.

What's your current soundtrack to the city?
For me it’s always the CD of a musical. These days I keep replaying “I’m Getting My Act Together and Taking It on the Road. It's an old off-Broadway show but I love it.

Best cheap eat in the city.
A Tastee Delight cone.