We are eight days into the new year, which means it's time for summer music festival announcement season! We already got the details on the reunion-heavy Coachella lineup earlier this week, and today, Governors Ball announced that Kanye West, Beck and The Strokes will be the headliners of this year's festivities.

You can see the full lineup below in the official poster, which was designed by West's creative agency DONDA. 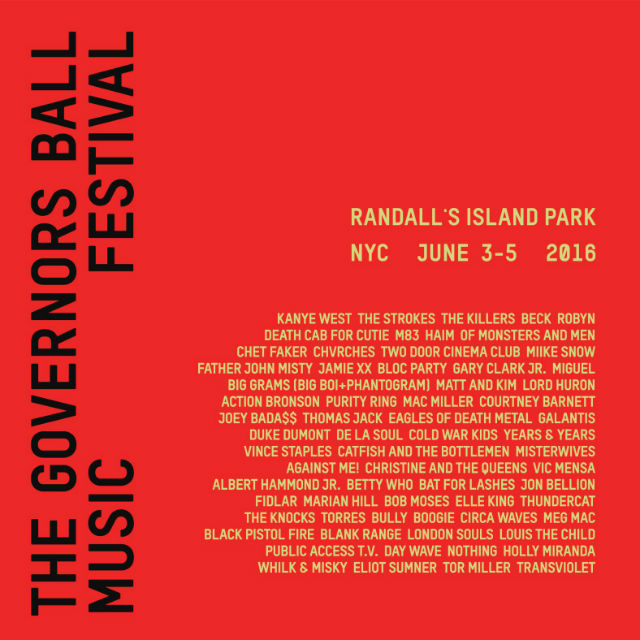 Last year's festival included Drake, The Black Keys, DeadMau5, Lana Del Rey, Florence + The Machine, My Morning Jacket and Björk. You can read coverage and see photos from the event, and check out a video recap below.

Kanye West previously headlined Governors Ball in 2013; The Strokes, who are working on a new album, last played in 2014—you can watch their full set from that year here. This will also be the first time West and Beck have performed at the same festival since the 2015 Grammys incident.

After two years of teases and false reports, it seems West is truly on the verge of finishing and releasing his much-anticipated followup to 2013's Yeezus—the album is reportedly titled Swish, unless something changes in the next few weeks (which could happen!). The album could be out as soon as February, considering that Kim Kardashian announced that West would be releasing new songs every Friday, just like he did in 2010 leading up to the release of My Beautiful Dark Twisted Fantasy.

#beck
#governors ball
#kanye west
#Music
#music festival
#The Strokes
Do you know the scoop? Comment below or Send us a Tip