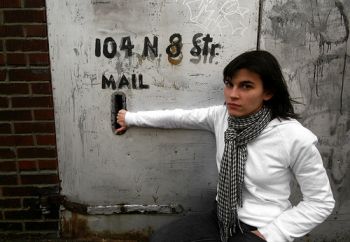 Kaki King (MySpace) is a guitar player and singer-songwriter from Atlanta, Georgia. She lived in Brooklyn for 7 years until last summer, when music started taking her on a permanent tour around the world. Her upcoming album is called Dreaming Of Revenge and will be released March 11th on Velour Records. King was nominated for a Golden Globe for Best Original Score for the music she played in the Sean Penn film Into the Wild, and Rolling Stone Magazine has declared her the first and only female "Guitar God."

Interview and photo by Wesley Verhoeve. For more of his photos from this shoot please go here.

You lived in Williamsburg for about 7 years until you started a perpetual touring lifestyle last June. Do you miss the city when you're on the road or is it a nice break for you?
New York is the only place I know of where if you stay too long, you get sick of it, but the instant you leave you miss it. Things I miss about New York whilst on the road: 24 hour bodegas, instant cheap eats everywhere, amazing-looking people who are boring, boring-looking people who are amazing, a transit system that never shuts down, and a city of 8 million where you still manage to run into everyone you've ever known.

You used to play music in the subway. Which were your favorite stations to play?
The 6th ave L train stop which connected to the F train. Best platforms in the city!

How did you get involved in writing music for Sean Penn's movie Into The Wild?
Martin Hernandez, the sound editor for Into the Wild, had used some of my music as temp tracks for early edits of the film. This piqued Sean Penn's interest and he contacted me and asked if I'd be interested in contributing music. Slightly intimidating when Sean Penn calls your cell phone . . .

Did you attend the Oscar ceremonies since Into The Wild's music was nominated?
The music was ineligible for an Oscar (along with several other scores) because of some technicalities. It was sad, since all I really wanted to say was that I was in the same room as Angelina Jolie.

You also played on the Grammy Away winning Foo Fighters album Echoes, Silence, Patience & Grace. How did this come about?
Dave Grohl was a fan, and invited me to stop by the mixing session for the record. He told me he had a song he wanted to play for me--I thought he meant it was recorded already, but he actually meant he was going to play it on guitar. As he was playing I picked up a guitar nearby and started playing along. We recorded the song a few days later--I thought it was going to be a bonus track or a B-side, but it ended up being on the record!

You're about to release a new album of your own (Dreaming Of Revenge, March 11th on Velour). Do you feel extra pressure for this record now that you have the 'Oscar Nominated/Golden Globe Nominated/Grammy Award Winning Album Contributor tags attached to you name?
I don't feel any pressure because I think I made a great album, but because all of this Golden Globe (no Oscar) and Foo interest has sort of overshadowed what I'm doing personally as an artist I'm having to fight to steer people back towards MY music. It's a balance I suppose--on the one hand participating in such major projects is more exciting on an instant level, but when I think of the blood, sweat, and tears that went into Dreaming of Revenge I only hope that these major projects make new people want to hear the record.

Did you record the new album in NYC?
Upstate, in Kingston, NY. At Malcolm Burn's studio, Le Maison Bleue.