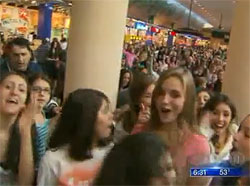 Finally, Justin Bieber's Long Island mall nightmare is over: The 17-year-old has agreed to film a PSA about cyberbullying in exchange for criminal charges related to a cancelled 2009 mall appearance being dropped against his manager and other record label executives. Nassau County DA Kathleen Rice said, "To have someone like Justin Bieber, who is emulated by kids his age across the world, educating people about the dangers of cyberbullying, that's invaluable." Invaluable for his anti-abortion opinion, too?

A year and a half ago, Bieber, just 15 and an emerging tween sensation (not yet the international superstar), was scheduled to appear at the Roosevelt Field Mall. But thousands of girls and their aggressive parents (parents were getting into fights with each other about placement in the line) forced the police to cancel the event. The cops were also unhappy because Bieber's manager Scott "Scooter" Braun and a Def Jam music executive refused to help calm people down by not sending out Twitter messages to the Beliebers.

The misdemeanor charges were dropped against Braun and Roppo and Def Jam will pay an $8,000 fine. Bieber was not charged, and a Touro College law professor told Newsday, "Legally, for him to be involved in the solution to dealing with the criminal charges against other people is extraordinary," and a celebrity magazine editor said, "It's not a punishment at all. It's a P.R. fantasy. It makes him look very responsible and very mature."

Braun's lawyer was happy about the deal, "We started the week by bringing bin Laden to justice and we're ending on a happy musical note." Speaking of, check out Bieber and special guest Chris "throwing a chair in the dressing room window" Brown in concert last week:

#cyberbullying
#justin bieber
#long island
#psa
#roosevelt island mall
Do you know the scoop? Comment below or Send us a Tip
A new Gothamist is coming! We’ve moved comments over to our beta site. Click here to join the conversation and get a preview of our new website.