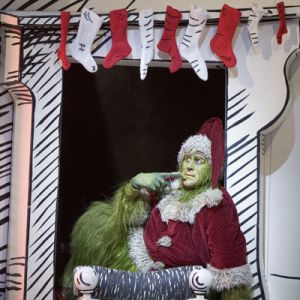 State Supreme Court Justice Helen Freedman has ruled that the Broadway production of How the Grinch Stole Christmas can and will proceed, despite the theater owner’s attempt to lock out the stagehands. “Grinch” producers dragged Jucamcyn, the third largest owner of Broadway theaters, into court yesterday seeking an injunction to let the show go on. Local One, the stagehands’ union, is on strike until a contract is agreed upon with the producers’ league, of which Jucamcyn is a major player. But the union had agreed to stop picketing for “Grinch” because that limited-run production has a separate contract with the union.

Jujamcyn’s lawyer questioned Judge Freedman’s authority under state labor laws to stop the lockout, but Freedman was unbowed and armed with sound bytes. "I think one Grinch in town is enough," she declared to cheers in the courtroom, which was packed with adorable little “Grinch” cast members. James Sanna, executive producer of the $36 million spectacle, was camera-ready too, saying, “We got our miracle on 44th Street.” (“Grinch” is performed at the St. James Theater on 44th.) Last night cast members were reduced to singing songs from the show on the sidewalk outside the St. James; on Friday morning at 11am they’ll be back in business.

Of course, with the strike at 26 other Broadway shows still unbroken, a happy ending remains out of reach. It was believed that producers and Local One were to continue talks on Sunday, but that appears to be in doubt. Theater insider Michael Riedel’s sources tell him that producers were furious that the union had not agreed to meet sooner to try and hammer out a deal before the lucrative Thanksgiving weekend. And now it seems they’ll only meet if Local One president James Claffey is willing to make a deal: “As one producer says, ‘We're not going to meet just to meet. We've been through that enough times already.’”