JPMorganChase Offers to Shield Church From the Elements, Like Sunlight 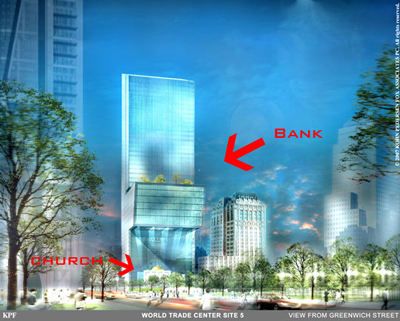 Architectural firm Kohn Pederson Fox has drawn up plans for the new JPMorganChase building that will arise near the southeast area of Ground Zero. It involves an interesting integration with the rebuilt St. Nicholas Greek Orthodox Church, which was destroyed in the 9/11 attacks. The 40-story tower will include seven cantilevered trading floors that will extend from the tower and cover the diminuitive church.

The benefits of the overshadowing are being widely lauded. Gov. Spitzer says that one could play chess in the rain, under the overhanging tower.
Curbed points out that the Port Authority spokesman Anthony Shorris highlights the opportunity for creative lighting effects at night, when the church could be reflected in JPMorganChase's facade.

We're frankly shocked that no one has pointed out the appropriateness of casting the planned Liberty Park in perpetual shadow as an appropriate way to signify the sadness of 9/11, as long as all architectural rationales are being sought after. Looking at the architectural rendering of the plan, we think that it's a pretty perfect symbolization of New York City's cant towards capital over religion. Given that's what the 9/11 attackers were striking against, this might be an apt repudiation of their deeds, in lieu of the non-happenings at the rest of Ground Zero.

(Image taken from The Real Estate, at The Observer)