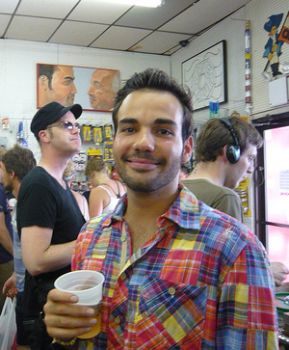 Joe Franquinha and his father run Crest Hardware store in Williamsburg. In the '90s the shop began hosting a unique art show, which integrated various artists' pieces into the shelves amongst the hardware supplies (watch a video about it on PBS). After a hiatus, they brought the show back this past weekend with a grand celebration, and we highly recommend checking it out. The Crest Hardware Art Show runs through July 11th; now, meet the manager/co-curator...

What is the Crest Art Show all about? How and when did it begin? The Crest Hardware art show is all about taking love for my community, my love of art, my love of hardware and welding them together to bridge a gap in this continually changing city, but Williamsburg in particular. It began in the early nineties with an artist named Gene Pool asking for some window space. We gave him an inch, he took a mile. By mile I mean 5000 square feet of retail space. Which is actually only 280 feet short of a full mile. Sorry, that's the hardware end speaking.

How long had it been on hiatus for before this past weekend? What spurred the decision to bring it back? The last show was in 1999, way too long of a hiatus. It had been on the back burner as far as my to do list goes. A couple of things were in front of it, like building the outdoor garden center. Now that thats been up and operating in it's second year I had the time needed to make sure this years art show was bigger and better than the last. Living, working and partying in Williamsburg I see what many of these people are capable of creating first hand. Many of these artists are my regular customers and I feel Eric Haze put it best when he spoke about the show. He simply said, "It's about putting something back into the soil."

Is it just once a year, or can people find art in there all year round? The show ends July 11th. But I wouldn't be surprised if 3 or 4 pieces stay a little longer or become permanent fixtures.

As co-curator, how were you involved in the show this year? I started putting this together in January. Gene Pool had a lot of contacts for artists that had participated in past shows. Some emails were obsolete, some phone numbers were changed, but through the magic of Google we corralled quite a few. The excitement in their voices from hearing the good news was a huge catalyst for me. From that point I started reaching out to some of the newer people in the area that may not have even heard of the shows past success. After a short explanation, they were game.

What has been your favorite piece so far throughout the years? It's hard to pick out one from this show alone. I was blown away by some of the pieces. Wendy Klemperer's "Chained Hound" is definitely a stand out. "Running Man", a zoetrope by Greg Barsamian is an exemplar contextual piece. An artist by the name of CR, blessed us with a piece that shows true craftsmanship and detail of what happens when wood meets stain. Eric Haze's site specific charcoal drawing, "True Value." M11x's "Eames Hot Rod Boombox" brings a twist of flavor to a Herman Miller classic. I can go on and on because I'm so proud of how high the bar was set this year.

How did Saturday's event go? Saturday was a huge success. The turnout was ridiculous. Well over 1500 people came through to enjoy incredible art, free food, free beer and live performances from incredible bands like Meowskers, The Subjects, Frankpollis and Holler Wild Rose, who closed out the show. At one point a guitar amp blew a fuse. My music coordinator, George Davis ran up the block to my hardware store, got a fuse from the back counter, ran back down, replaced it and kept things moving without a hitch. We rocked Metropolitan Avenue from 1 p.m. 'til about 8 p.m. The music end of things wouldn't have been nearly as great with out George and everyone else's help at the Musebox.

With the neighborhood changing, have you seen a drastic change in the community in Williamsburg? Sure I've seen changes, good and bad. Damn, I remember a time when I was a kid taking a lunch break from work, wanting to ride my bike and being told by my dad not to go down near Bedford Ave. Not because of traffic congestion but because there were so many junkies hanging around. I have seen a lot of things in just the last couple of years alone, good and bad. It's crazy that I can take a ride down a street one week and maybe a couple of weeks later there's a building going up where a warehouse used to be. We have reached the point of over-saturation. The bubble has burst and these developers are already waist deep when they realize they can't fill these condos at the rate they originally thought. Not to mention the L train is running well past 100% capacity (and that's coming from someone who walks to work!) On a positive tip, the music and art scenes are truly potent right now. I love sharing a heartbeat with fellow Williamsburgers when it comes to contributing on a communal level.

Do you have any crazy customer, or artist, stories to share? I swear if I could record some of the shit that happens day in and day out I could turn it into a sitcom. But this one time, a man, definitely mid '70's is complaining about how long the line is and he's screaming at my cashier to hurry up. When he gets to the front, he throws the bag of nuts and bolts he had at her, point blank range then runs out. My employee Bill (former marine) runs out after the guy who, in the midst of chaos was about to run out into on coming traffic, Bill grabs him by the arm and slams him up against the back of a van. (Better that than hit by an oncoming car). We hold him on the ground, not threatening to call the cops, all my cashier wants is a simple "I'm sorry". So he says, "I'm only sorry I got caught". I had to laugh. Here's this guy definite AARP member acting like a juvenile who tried to rack spray paint and got pinched. It takes all kinds I guess.

Please share your strangest "only in New York" story. The blackout was a unique time for a ton of new yorkers. I had a Nextel phone at the time and they seemed to be the only ones working. So one friend calls me so I pick him up at the foot of the bridge because he had been walking all day. As I drive by my store I realize the alarm was going off. I couldn't find my keys, so I motored to Queens to pick up a set my mother had. Mind you there are no street lights so I had a slight case of leadfoot. I get back to the shop, open the gate and I'm looking around for a perp. Turns out the backup battery failed so it tripped the alarm but I still couldn't shut it off. Next thing I know the front door to the store swings open and 4 cops had theirs guns pulled on me and my buddy. Somebody must have thought "alarm going off plus flashlights wandering around the store equals looters". I nearly pissed myself. So with my hands on my head I tried to explain that it was my store and that the keys were in my pocket. Once they tested them, they gave me the routine "Ok, carry on" and walked out.

Which New Yorker do you most admire? My father, who started this business 46 years ago is an incredible example of what New York is all about. Passion, hustle, hardheadedness, love and compassion. The man is 80, and he looks like he's in his 60's. He stretches every morning, is at work by 7 and runs circles around us all day. He's like the Jack LaLanne of hardware. His practical business principles are counterbalanced by love for his surrounding community. He has always stressed the importance of "showing the flag." In other words, eat at the local restaurants, share a drink with friends at a local bar, buy locally, donate to local causes (schools, churches, charities, community groups, etc) because one hand truly washes the other. I'd say the single most important thing he's told me is, "If you enjoy what you do, you'll never work a day in your life".

Given the opportunity, how would you change New York? I'd bring music, arts and physical education back to the regular public school curriculum. The three of these things are outlets from the normal classroom experience and they were huge building blocks in my upbringing. I'd also add curriculum like environmental awareness. Secondly, I'd increase the quality of new construction going up all over the city. Mandating LEED certifications on huge projects. I think that's a good start. The list goes on but as New Yorkers it's impossible to ever be satisfied. That's one of our best qualities.

Under what circumstance have you thought about leaving New York? I can see myself leaving to travel for months on end but to me there's no place like home. There are so many resources unbeknownst to a lot of city-dwellers. It's easier than you think to get away from brick and mortar. Have a picnic in Rockefeller state park in sleepy hollow or stay close and spend a day at Brooklyn Botanical Gardens. It's amazing to be only hours apart from snowboarding upstate or surfing on the east end of l.I. In so many ways new york brings the world to you, it's an incredible gift. New York, New York... Say it twice, cause it's so nice.

What's your current soundtrack to the city? It's summer so we have to keep the energy high ... Santogold's self titled album brings so much to the table; Vampire Weekend's album lives up to the hype too; Calvin Harris, "I created disco" has some killer tracks too; Yeasayer, "All Hour Cymbals", they're awesome live; mix in some MGMT, like "electric feel" and call it a day....

Best cheap eat in the city. El Moderno. It's an Ecuadorian restaurant on the corner of Metropolitan Avenue and Union avenue in Williamsburg. Good sangria, good happy hour deals. Right on the Lorimer St stop on the L.

Best venue to see music. Other than the Crest Hardware warehouse? McCarren Pool. Musical acts are always well chosen, it's outdoors, the pool parties rock and if you don't go in you can always sit in the park across the street and listen. I sat in the center of the soccer field and listened to Chemical Brothers with some friends last year. And if you want to continue getting your drink on, you can hit up Pete's Candy Store right down the block. Plus they make a killer panini.