Jon Hamm Doesn't Want You Talking About His Ham 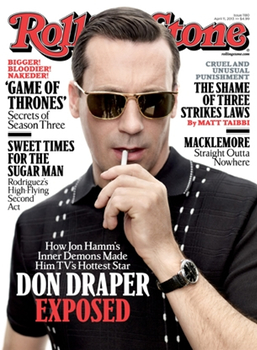 Hamm's ham did not make it onto the cover

Over the past year or so Jon Hamm's ham has taken over the spotlight from the actor, and in the latest issue of Rolling Stone he addresses the situation. The attractive, talented and wealthy actor, who landed the cover of the legendary magazine for his role on one of the best shows on television, took a moment out from living the dream to complain about getting too much attention for having a large penis.

Hamm has sent this message out the people of the internet: "They're called 'privates' for a reason. I'm wearing pants, for fuck's sake. Lay off. I mean, it's not like I'm a fucking lead miner. There are harder jobs in the world. But when people feel the freedom to create Tumblr accounts about my cock, I feel like that wasn't part of the deal."

Hamm is referring to the Tumblr called "Jon Hamm's Wang," which has been going for two years strong. Some of the photos are pretty unbelievable, like, is he just fucking with us now by shoving stuffed animals down there?

Anyway, having contributed to the problem with a post titled 13 Photos Of Jon Hamm's, You Know... "Ham", we would like to take a moment to apologize to Jon Hamm's ham—we're sorry, you never asked for this kind of attention.

#jon hamm
#jon hamm's ham
#rolling stone
Do you know the scoop? Comment below or Send us a Tip