Though it’s not the most glamorous of the environmental issues, colony collapse is a problem. Bee colonies, responsible for pollinating a significant portion of the world's food supply, are slowly dying out. Hell, even Haagen-Dazs is getting behind the issue. So what are three culinarily-inclined New Yorkers to do? Start their own bee colony in Brooklyn! Jon Feldman (general manager at Frankies Spuntino), Brandon Hoy and Eddie Diaz (co-owner and manager of Roberta’s, respectively) have been keeping bees on their roofs in Williamsburg and Carroll Gardens in an attempt to boost their population and beautify the city’s flowerboxes. There’s just one problem: it’s illegal.

How did you guys all meet? Eddie: I’ve known Brandon for years, just through mutual friends when we lived in D.C., just through partying and bars.

Brandon: We’ve known each other for what, six, seven years now?

E: Jon I worked with when we were at Inoteca. He was a sommelier and I was a server.

Jon: And I met Brandon basically through Eddie’s group of friends. It’s been bolstered by us becoming interested in the same sort of things, and getting together with various projects and interests.

B: It started by being wasteoids…

Was this a mutual idea? B: Jon kind of sparked the interest for Eddie and me. We thought it sounded really cool and kind of like what we were already doing at Roberta’s. We had been doing a lot of farming and it fit in with the whole idea.

J: I became interested in it when I went to culinary school. I went to the Culinary Institute of America and became close with one of the deans who kept a really amazing garden, and she told me a few times about her bees. I just thought it was really cool and I’ve certainly learned more about it this year. And then I got Brandon and Eddie on board, and it all kind of happened. It was the first year I saw in the crosshairs that I could actually do it.

B: It was kind of awesome; it felt like a science fair project.

J: I remembered being really worried if they were really going to help me with it. And I came back and Brandon had started reading all this stuff.

E: We started watching YouTube videos and we were online every day like "Oh! Bees are cool!"

J: Then one day we were out for a beer with a really close friend of ours, and were talking about bees, and he said, "Dudes, did you not know my mom is a master beekeeper?" So he set it up and we went and hung out with her in Nyack for an afternoon, and she took us to this wonderful place called the Pfeiffer Center; an educational center for biodynamic farming, and introduced us to a guy named Ron Breland, who’s one of the leading authorities in New York on beekeeping. So they mentored us for a few months.

E: We were calling them all the time, every time something went wrong.

J: We actually had about 10,000 bees in the back of a cab once and the driver didn’t even know, and we were calling them with questions the whole time. 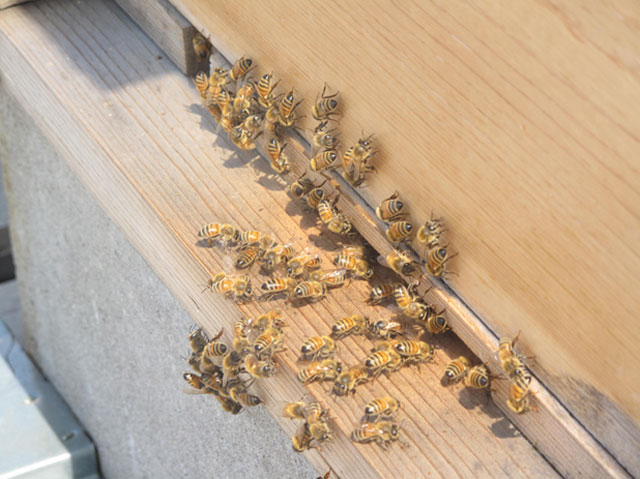 Where did you guys get your bees? J: We got them from H&R Apiary in Georgia, and they come in a little box. We got them in the mail and literally dumped them into the box that we built. There are a lot of Georgia apiaries, a lot of Texas and Florida apiaries. The weather down there is better.

B: It gets a little cold in New York. They have a hard time making through the winter, you really have to help them along. You have to feed them and give them proper shelter so they don't die off.

Is this a project to help fight or bring awareness to colony collapse? E: Well, it’s a few things. Colony collapse is one of them, and there are also just a lot of antiquated laws that equate having bees to having a fucking tiger.

J: It's kind of silly. Yeah, we're doing this for a number of reasons. First and foremost, it';s interesting for us to do; it's an interesting hobby. You get all the other wonderful things happen: you get honey, you get bees, you educate people on raising something that's potentially becoming extinct and how to regenerate that population. And bees are the chief pollinators; they pollinate 1/3 of the world's food supply. If they're dying, we get less and less pollination. And that's not necessarily an issue directly facing New York City, but it is in some way. It's affecting surrounding areas and we want this to show people how easy and approachable it is to do, and how great doing it is for the environment, and carrying that to teach others. And we're utilizing it. We're using a lot of the products that come out of here: the wax, the honey, and the propolis, which is great for the immune system. And it's fun. It's a lot of fun. We're having a really good time doing this.

So is that myth true that local honey has immune boosters? B: I mean, if you think of allergies, absolutely. When I came to New York I had awful allergies, but it was just a reaction to things my body wasn't used to.

E: And the way we treat these things usually is with antihistamines, which just suppress the reactions instead of acclimating you to the thing that's causing it.

J: So honey and pollen are the most concentrated source of what you could potentially be reacting to, so if you take a spoonful of honey a day, your body is acclimating to what's most concentrated in and around this area. So your body becomes used to it.

B: Since we started on the local honey stuff, I haven't had allergies in two years.

What are the bees pollinating around here? J: They're pollinating pretty much everything they come in contact with, by default, by just the nature of how they operate. New York City is definitely like an orchard. There's a lot here, and they're going for what tastes good and what's appealing to them, whether that's a poppy flower down the street in someone's window, or McCarren Park or Brandon's tomatoes at Roberta's.

Brooklyn's Urban Beekeepers: Breaking The Law For The Planet (Part I) from SkeeterNYC on Vimeo.

How far can they travel? E: Approximately three miles, but these things are relative to how hard they have to work. Their main goal is to produce honey, to produce stores for the winter and to raise their young. They're workers. So they'll only go in this three-block radius if that's all they have to do, but if there's not enough they'll go farther.

B: There's so much here that it's unlikely they're traveling that far.

Does the honey's flavor reflect that mixture of plants? J: We just harvested it for the first time, and we got a pretty substantial amount. We all agree that it's very floral and very much elderflower scented. So perhaps there's an elderflower tree around here. New York City is great about that. There are all these people in the history of the city who plant these rare trees, and as a result you have this really wonderful variety here. And so it is very possible that it is an actual elderflower tree. Or perhaps a variety of what they've collected gives that off.

E: There are probably a lot of small wildflowers that have nectars similar to elderflower.

So what do the neighbors think? Do they know? E: Actually, I have a friend who lives right down the street. She has a patio and says she's seen tons of bees this year on her patio, and she loves it, because she has way more flowers. Her stuff is growing twice as much.

J: A lot of people have commented. We don't know where our bees are all the time, but I'll tell people we're raising bees and they'll say they've been noticing more bees in the area. And even if they're not our bees, there are more bees around.

Are you guys a part of the NYC Beekeepers Association? J: No, but not because we're against it. We've kind of done this on our own and we wanted to do this for the first time and learn together as friends, and bring some of our friends in on it, but not get really broad with it. We know a lot of people that are a part of it, and all of it's great. It all coincides with what we really want, which is for more people to learn about this and do something.

Are you worried about media attention getting you caught? B: I'm not. I mean, I know there are other people that get way more attention and probably have three times more hives, and they don't seem to be scared. And I don't think there's really a lot of enforcement on it.

E: The only bad thing that could happen is that they could destroy the hives. That would be the only thing that would really suck.

J: We are taking a risk, but I'm willing, and I think I can speak for all of us, to do that because we're having fun. It totally coincides with all of the things we're interested in and it's a really good thing, and I'm willing to step out a little bit for a cause.

E: I think that, again, we fully support everybody's efforts at raising bees in the city, but I think orthodoxy reigns completely, and limited thinking reins a lot of ways with people who have been doing this for a long time. What I like about what we've done is that there are no qualifiers. You can do this next year, and you can maybe do better than us. Probably better than us. If you take the right steps, you read books, anybody can learn from the mistakes that we've made and build off what we've done. Just like we did with other people.

B: Like we said earlier, it was kind of like a science fair. We got the information we needed to start, and we were constantly learning as our hives got bigger. We see problems and we learned how to diagnose and treat. And that doesn't come from any previous knowledge.

J: That said, you should know what you're doing, but don't be afraid to give it it's own identity. Don't be limited by anyone else. There are all these people who are doing this and are being snooty about it, and you know what? None of that means anything to me. We're doing this for all the reasons that we've said, and one of the main reasons is that we want to connect with other people. And if you don't want to connect, you're still doing well, but you don't really have anything unless you give it away. I mean, if we can't give this information to other people, that's pretty selfish and stupid.

B: There are a lot of zero sum projects like this that are out there that people just need to do. And you have to get away from "what is this going to do for me?" and ask your self what it's going to do.

#beekeeping
#bees
#brooklyn
#colony collapse
#interview
#williamsburg
Do you know the scoop? Send us a Tip