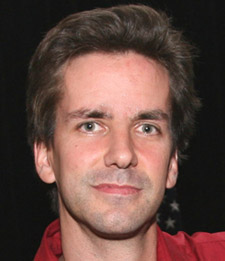 This Sunday's free Brooklyn Book Festival is a one-day-only explosion of authors, publishers, poets and scholars, all gathering for discussions on four stages about anything and everything related to books, which are those heavy things people drag around for times when they can't read blogs. Check out some of the bold face names who'll be participating: Joan Didion, Jonathan Lethem, Dorothy Jonathan Franzen, Chuck Klosterman, Jimmy Breslin, Walter Mosley, and many, many more. Seriously, this festival is massive; marvel at the schedule of events here.

Yesterday we sent some questions about the festival over to Johnny Temple, who chairs the fiction programming. Though many know him as the bassist for Girls Against Boys, Temple has roots in the D.C. post-hardcore scene and, as comes with the territory, a passion for all things independent. His Akashic Books publishing house is dedicated to nurturing urban fiction and political non-fiction that mainstream publishers ignore. Their motto? "Reverse-gentrification of the literary world." So it's no wonder Ian MacKaye and Thurston Moore will also be holding forth in downtown Brooklyn Sunday.

There are a lot of authors participating in the Brooklyn Book Festival. As a reader, who are some of your favorites? Paco I. Taibo II, Jonathan Lethem, Dorothy Allison, and Arthur Nersesian are among my personal favorites.

What’s the mission of the Brooklyn Book Festival? To create the hippest, smartest, most diverse public book event in the world. The idea that this could be born under the vision and guidance of an elected official, Brooklyn Borough President Marty Markowitz, is profound. It would be hard to find a political leader who has done as much as Marty has for the literary life of his or her constituents.

How many books do you read a year? A rough guess would be around 80 or 90.

What are you reading now, what did you finish reading last, and what book do you plan to read next? I am currently rereading “Sula” by Toni Morrison, I recently finished a fantastic out-of-print novel called “The Lonely Londoners” by Sam Selvon about the post-war Caribbean experience in London. I am hoping to soon read “The Corrections” by Jonathan Franzen.

How are you enjoying "Sula"? “Sula” one of the greatest novels I’ve ever read, so I’m thoroughly enjoying it, though much of the book is also quite upsetting.

What’s your favorite book of all time? (If, say, you had to take one on a desert island.) “Love in the Time of Cholera” by Gabriel García Márquez

Have there been any books that others regard as classics that you just don’t appreciate? In general, I tend to love books that have been deemed “classics.” In today’s literary landscape, readers don’t seem to appreciate the profound darkness explored in classics by authors such as Steinbeck, Faulkner, Toni Morrison, Richard Wright and others. Much of contemporary literature reads like light fare in comparison to 20th century American classics.

How did Ian MacKaye and Thurston Moore come to be involved in the festival? I invited them. I have known Ian for more than 20 years (my band in the late ‘80s, Soul Side, was on Dischord Records, run by Ian and Jeff Nelson).

For those who don’t know, what is Akashic Books? Akashic Books is an award-winning Brooklyn–based independent company dedicated to publishing urban literary fiction and political non-fiction by authors who are either ignored by the mainstream, or who have no interest in working within the ever-consolidating ranks of the major corporate publishers. Akashic hosts additional imprints, including Punk Planet Books, Dennis Cooper’s “Little House on the Bowery” fiction series, Chris Abani’s Black Goat poetry series, Hotel St. George, and The Armory.

How did you get involved in book publishing? It was a hobby gone awry. When my band Girls Against Boys signed to Geffen Records in 1996, I had extra money in my pocket for the first time. Having just made a deal with a heartless mega-corporation, I felt I needed to invest in independent culture, where I was raised, culturally. So two friends and I published a book together—The Fuck-Up by Arthur Nersesian—and I quickly got the publishing book and couldn’t control the habit.

What neighborhood do you reside in? Fort Greene, Brooklyn.

What’s your favorite local restaurant? Hua Long Chinese Restaurant. They made an incredible broccoli with garlic sauce (with tofu), and the price is about $6. It cost about $5 when I moved into the neighborhood in 1990.

Favorite local bar? Frank’s Lounge on Fulton Street. It feels like being in a Spike Lee movie or a blaxploitation film from the early ‘70s.

Do you have a good New York story? Some friends and I once tried to throw a party on the subway; the plan was to carry hidden flasks of alcohol and we mapped out a subway routing that would pass through Brooklyn, Manhattan and Queens. But on the way to the subway we got into a street brawl and the party never happened. I wrote a long version of this story for the book The Subway Chronicles, published last year.

If for some extraordinary reason you couldn’t reside in New York City, what would be your next choice? Lamu, a small island off the coast of Kenya, Africa.

Anything you’d like to say about your experience that day and, seven years later, what it’s come to mean? One of my most vivid memories is of a friend who had just moved to New York from the island-nation of Trinidad. He was just weeping and I could tell he was deeply regretting moving to this city.

#2008
#brooklyn book festival
#interview
#Johnny Temple
Do you know the scoop? Send us a Tip