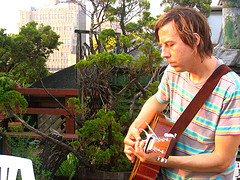 John Vanderslice's reputation as "the nicest guy in indie rock" couldn't be more spot on. Last night we enjoyed some time with him on the roof of the Hotel Chelsea where he sang us a 'lil song. You'll be seeing video of that later, but first - get to know the man behind the reputation. He'll be at Sound Fix tonight at 7pm for a free show, and he was also kind enough to provide some As to our Qs...

Tell us a little about the "blog tour" you've been doing?
Well, I decided to film the record live in HD and give a video to one of our favorite music bloggers. The recording was WAY more difficult than I thought it would be but it came out very nice. We had Stereogum, Gorilla vs. Bear and Brooklyn Vegan and some other fantastic bloggers involved. We did this because:

1. it seemed like an original idea
2. it was a nice way to give something to sites we like
3. we are lazy, it seemed easier than actually touring

Al the videos are right here.

There are references to 9/11 in some of your songs. Did you find that day changed the tone of the country's creative output?
I think the US had a collective psychotic episode following 9/11. It so weakened us a people, we allowed a small group of radical industrialists to sell us a preemptive two-front war based on falsified intelligence. Iraq is easy to see as a debacle, but Afghanistan was also a scam right from the get-go.

Please share your strangest "only in New York" story.
Well, I was walking down Bedford Ave in Williamsburg yesterday and I ran into about 10 people i know. This is strange because I live in San Francisco!

Which New Yorker do you most admire?
Erik Friedlander and Matthew Caws.

Given the opportunity, how would you change New York?
Now, ARTISTS AND TEACHERS LIVE FOR FREE!

Favorite NYC venue to see/play music.
I love the Bowery and Mercury.

Yankees or Mets?
Rooting for the Yankees is like rooting for Glaxo Smith Kline or Microsoft. You have to take the Mets over the Yankees, but major league ball is very problematic. One of the best baseball games i've ever seen was the Albuquerque Isotopes vs Iowa Cubs in Des Moines. That was some raw shit.