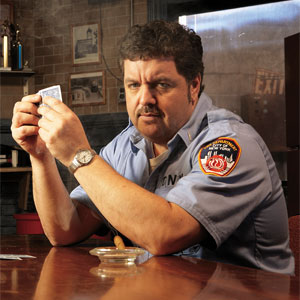 John Scurti is an actor originally from Long Island and a graduate of Fordham University. He currently he plays Lt. Kenny “Lou” Shea on FX's Rescue Me. We recently talked with him about the show, filming in the city and of course if he really does yoga.

You are from the Island, is it good to be working close to home?
That is where I was born and raised, but I don’t live there anymore. If the question is, is it a good thing for a New Yorker to work on a show that shoots in New York? Yeah, it is a really great thing.

You do a lot of filming in the streets of the city, have you had any interesting encounters with New Yorkers while you were filming?
We have had scenarios where people don’t really give a shit that you are shooting a scene. They want to get to their deli or Chinese delivery guys on their bicycles just zooming past you. Sometimes it makes it in, especially because it looks great, but sometimes not.

I would love to say I have a whole bunch of stories about crazy incidents and stuff like that. A couple months ago there was an incident when we pulled up to set in Brooklyn. As we were getting out of the van, people were like “Get back in the van there is a guy with a gun down the street.” So we got back in the van, then back out of the van. It turns out it was just a stick. But you know, for the most part people, God love them, they put up with us taking over their neighborhoods for days at a time. That is an inconvenience, but for the most part things go real smoothly.

What kind of feedback have you gotten from firefighters?
Basically both ends of the spectrum. The guys who have been there the longest, the older guys, think it may be a bit too much in terms of the whole what happens here stays here mentality. The younger guys seem to like it a lot more. More that that, I think the cops are much bigger fans of the show than firemen, to tell you the truth. Because we are showing the lives of these guys and they are flawed and they are always fucking up. Cops love it. Cops eat it up with spoons.

How did you become connected with Denis Leary?
Ten or eleven years ago we had a mutual friend named Ted Demme, who is no longer with us. Ted had started out as a [production assistant] for MTV and he was working his way up the ladder of success and he and Denis became entwined over at MTV. He shot the Denis Leary things in black and white and jagged looking. They started working together.

I was friends with Teddy through a different set of people and Teddy actually just started putting me in movies – in Who’s the Man. At that point I really didn’t know Denis and then we did The Ref together about a year later and that is when I first had some hang time with him.

A bunch of years went by when Denis was just so busy and Teddy moved to Los Angeles. I really didn’t see Denis for a long time and then I kind of got reacquainted with him about five years ago. It has been great since then. He has given me a great opportunity not only as an actor but as a writer. They let me write an episode a season. It is good stuff. He is a good friend.

Are you writing any of the episodes for this season?
Yeah. I just finished writing [episode] eleven about two weeks ago and it always seems I always get episode eleven out of thirteen. They always give me episode eleven, I am not sure why.

I handed it in about two weeks ago and it is a very interesting process, the whole writing thing. I call it the sausage factory. Don’t get too attached to anything because things are pulled and yanked to other episodes and sliced and diced. And that is one the reasons why I think the show is so well received. It has its own language. It has own tone. It is really fast and it is funny, I don’t know of a lot of shows where up until the minute that the camera is rolling – especially if Denis is around, mostly when Denis is around – we are just constantly slicing and altering and moving thing and cutting and adding stuff. I think that is one of the reasons the show is successful.

How much of what we see is improvised?
Well probably around fifteen percent. It depends. It might be thirty percent.
As I said, there is a lot of flexibility with the script in changing stuff. If a line doesn’t work for you, you can find a way out of it. You can say, “Hey listen I want to do one this way” and for the most part they are going to listen to you and respect you and shoot it that way. It is slightly improved.
I think a lot of the firemen scenes with Denis and the crew, there is a lot more improv going on there, because we are in the bullpen and we all know if it is going to suck so we won’t leave until we got something that doesn’t suck. For the most part we can usually find that somehow by improving a lot.

There is a lot of comedy and drama on the show. Is a challenge to switch between the two, or is it something a good actor like yourself revels in?
I revel in it like a pig in shit. They are both difficult to do, but I am lucky to always be able to do comedy and I think what I am really proud to do is pull off the dramatic scenes. It was two years into the show when I realized, because I wasn’t sure about the other cast members. Denis I know, but these other guys I wasn’t sure how they would handle having to do comedy.
At one point we did a short for the internet last year where there is a loose dog that we think is a monster coming to eat us. They were given some basically physical slapstick stuff to do in a couple of scenes and these guys just took it and ran with it.. I think that is one of the strong points of the show, that everyone on it can play both and play both strongly.

Is there a lot of joking going on around the set?
Yeah, there is sometimes. Sometimes it is a pressure cooker. Sometimes people aren’t in good moods, it is hot and you’re tired at the end of the day. For the most part we try to keep it light. We try to have a good time and we also work really really fast. People who come and work on our show with us, actors mostly, are just constantly amazed at how we can come and be out of there in thee hours as opposed to what is very often a twelve of fifteen hour day. But it is a blast man, I am not kidding you. It really is just a blast to be a part of.

But this is really a season for Lou to clean the shelves and get some kind of equilibrium back into his life. Last year, just the arc that was there for Lou was just so amazing, so strong and fun to play. He just really doesn’t have that arc this season. I still have great stuff to do, but there is more of the fallout from all the drama he had last year. He is still with the nun at the beginning of the season and everyone is in kind of a good place when the season starts and that is of course so we can only tip the boat and get them into different places.

Lou is such a great character to play. I think people like him because he is just kind of vulnerable, he is slow and steady and he knows how to fix things. People really dig him and it makes me really happy. People come up to me in the middle of nowhere and say, “Hey great show” and “You are that guy, right?” I think it comes from a genuine desire to express their feelings that they always say to me that it is one of their favorite shows on TV.

Is there any chance of Milena Govich coming back?
Christ, I wish! [laughs] You know she is the star of Law & Order now so she is very very busy. I would say very very very slim, but you never know. She and I had such a great time. She is so sweet, she is so incredibly beautiful and sexy and married.
We spent a lot of time together, obviously playing Candy the hooker that I get involved with. She was just so young in the business and was just becoming incredibly hot very very quickly. But she is such a pro and she is so good and I would love nothing more to have her back, believe me. I just don’t know. Keep my fingers crossed.

And now the question I think everybody wants to know – do you actually do yoga?
I do not do yoga.

So we are not going to see Lou try Pilates this year?
No we would not. [laughs] That scene and sequence people still talk about. I personally have a motion sickness problem. I get really bad motion sickness to the point where I really can’t get on a boat anymore and I have to be careful in cars and airplanes. It is just the way that I am built - the equilibrium kind of a balancing.

After we were shooting that yoga scene we had to shut down production. I don’t think it has ever been done before. Because I got complete motion sickness during that scene. I kept springing up from that position. You keep doing it, rehearsing it and it was just the jumping up from that position when you are all coiled up like a spring. It was a painful painful day to create those moments of comic gold.