Don’t cry for John Scioli. After 30 years running Cobble Hill’s beloved Community Bookstore, and 43 years in the bookselling business, the 69-year-old is closing his shop. But Scioli isn’t being priced out—he's just ready to sell his building and retire. The winning offer: $5.5 million. After Scioli manages to clear the space of tens of thousands of books, he’s thinking about moving to the South of France.

“I've been going to the South of France since 2004 and I meet a lot of Russian women there—they go on holiday,” Scioli explains between drags of his cigarette.

“So they meet all these guys, and I overhear them—producers, movie guys. I tell [the women] I have a used bookstore, and they coo, 'Oh, do you have Dostoyevsky?' You know, they want to talk about literature. The guys are like, 'What are you talking to this guy for?'”

Scioli and his acerbic wit have roughly a year to move out of the bookstore and two more to leave his digs upstairs.

A New York native, Scioli originally opened up shop in Park Slope in 1971. Three years later, he and his ex-wife launched their second store in Brooklyn Heights. The soon-to-be-closed Cobble Hill location, which opened in 1995, is the only one remaining.

The Community Bookstore smells of water damage and it’s almost impossible to maneuver its aisles without knocking over stacks of books (the Times estimated his stock as somewhere between 60,000 and 100,000).

Scioli opens the shop around 5 p.m. and closes at midnight. He doesn’t pay cash for used books, but he does accepts donations, which pile up overnight outside his store. As customers approach him with ratty paperbacks, Scioli quotes a seemingly arbitrary (but always reasonable) price.

Chain-smoking outside its front door, and occasionally peering inside to survey his customers, Scioli spoke about closing the neighborhood institution, and how he’s watched his clientele change. 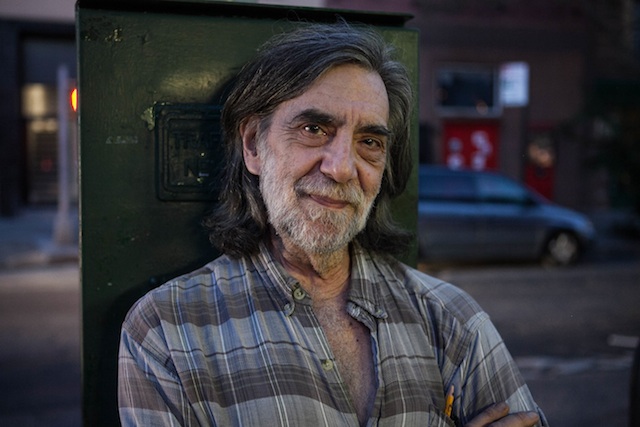 Your store is one of the last “messy bookstore” strongholds in New York. How does it feel to be closing? It is one of the last of its kind. I’m ambivalent about that, but I just cannot continue to do this. I’m 69 years old and you have to retire at some point. And with the internet, it’s been hard to make a living with a used bookstore.

How has Amazon’s popularity affected your livelihood as a bookseller? People will scan a book with their phones, a new book, $15. They’ll say, “Oh I can get this on Amazon for $6.” I say, “Okay, put it back and buy it in Amazon.” Some people are annoyed. That affected the book business a lot.

A lot of young people can’t handle this type of store. They want everything to look like a supermarket, like Barnes & Noble. Very neat. Some young people come in and they say, “Do you have a computer?” I’m like, “No, do you want to buy a computer?” and then they start to walk out. They don’t know how they’re supposed to find anything without a computer—like, they want Hemingway, and I tell him that their book is under the “Hemingway” section. “Oh my God, how did you find it?”

They don’t think to ask for help from me. Because they grew up on computers. They’re very oriented that way. And they all take pictures of the store, even if they don’t buy anything! It’s because they never saw a messy bookstore. There used to be a lot of used bookstores in New York, for many years, on Fourth Avenue. People come by and say, "Oh you’re still here! Thank God, you’re the last of the breed."

It’s an app on your phone that lets you post pictures online for your friends to see. What do their friends care about the books you look at? Look, this guy’s taking a picture right now [he points inside]. I don’t get that. That’s a young person’s thing.

But you admit that the store is a novelty. Yeah, it is. A lot of people will miss it. I’ll miss it, too.

Why do you think that it’s a novelty? It’s the whole culture now. There are TV shows about how to de-clutter your life, personal assistants who come to organize your closet. The philosophy is, live with less stuff. That’s why people throw out books, and so we take them. 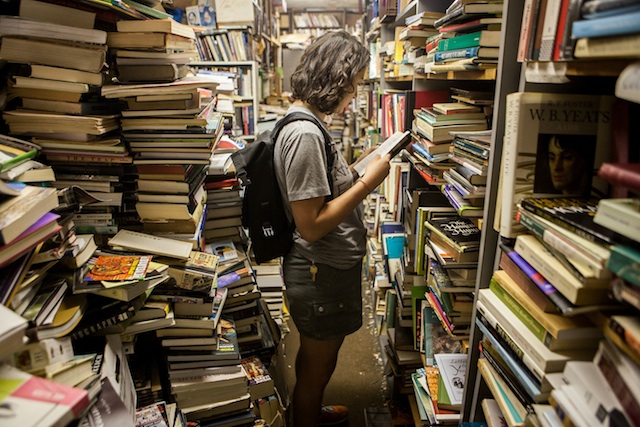 So, what exactly is a community bookstore? It’s just a name we chose, me and my ex-wife, many years ago. It’s not like I have room for community gatherings in there. The books have first preference.

Why did you start selling books? In 1971, me and my ex-wife Susan opened a community bookstore in Park Slope. The neighborhood was changing. The young people were coming in and buying the brownstones. We thought there would be a need for a bookstore because there wasn’t anything there. We started off with a tiny store and we worked very hard and it worked out.

But in 1974 we opened a store on Montague Street in the heights. Then we got divorced. I have to leave that [store] because the rent tripled. This building happened to be empty and it was for sale in 1995. I live upstairs. It all worked out fine.

What were some problems you faced opening the store? We talked to people in the publishing industry and book wholesale. And they said, “A bookstore in Brooklyn? You’ll go broke!” They were under the mentality that Brooklyn always had less bookstores than its population required. And they discouraged us, but we decided [to open] anyway.

It’s a good business model: People just give you stuff for free and then you sell it. I know!

What’s your background? It ain’t books. My background? I used to be an assistant manager in a supermarket in the Village. I was always in retail. I drove a cab for a while. My wife had been a teacher. She had more of a background in literature and stuff like that. We just decided to take a chance and open a bookstore.

So you became a reader after you the store opened. After I opened the bookstore. I gained more respect for reading, I learned a lot. 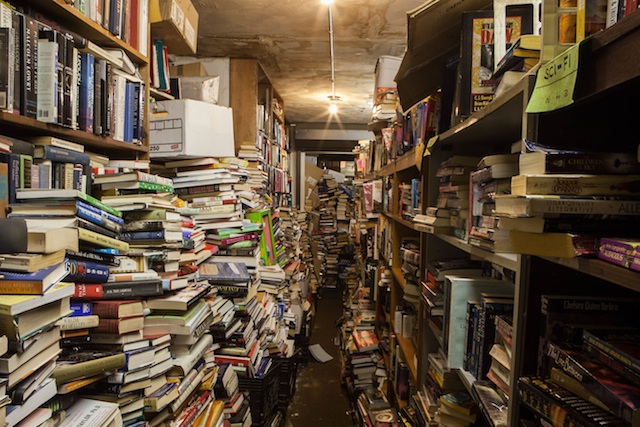 How has New York changed since your store opened? I’m from here. I grew up in Little Italy. In the '70s and early '80s, there was a big fiscal crisis. The future of New York was in doubt at that time. No one had any money. Gradually it picked up.

This neighborhood now has its good side and its bad side. People hate to see people displaced, but still, it’s much safer. I was held up twice in the ‘90s in my store. The guys were hard up. Now they don’t even bother. People buy brownstones along this block and gut it and put in Jacuzzis and fancy kitchens. They have a lot of money.

What are your regulars like? All kinds of people. Everyone’s younger in the neighborhood now. Some are high-brow, some are low-brow.

Do you have any regulars who stuck around for decades? Yeah.

What are they like? They’re all right—they get older and then they die.

Oh. A lot of people became regular customers but moved out of the neighborhood because of the rents raising. A lot of customers are in their 20s and 30s now. They say, “I used to come in here as a kid, play Ninja Turtles”—in the beginning, we had a lot of toys—and they find the leftover toys and they show their girlfriends. And the girls are totally bored when they do that.

But then the girls say, “I used to buy Baby-Sitters Club books here every month.” They grow up. Some of them have kids now.

I saw some Furbies inside. Yeah. People just give me stuff like that. One day a guy asked me, a young guy, “Do you buy books?” I said, “No, we don’t, because we have too many books. We take donations.” He said he has some Camus. The next day, I come out, I open the store, and there are a couple of Camus titles and also pots and pans and stuff. 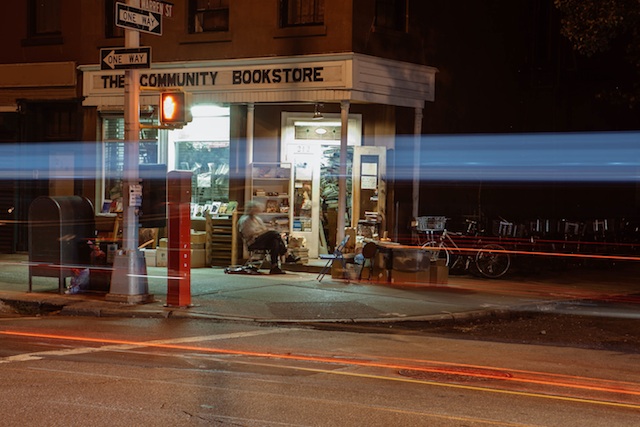 Who’s moving in after you clear out? The people who bought it don’t know yet. But that’s down the road, at least a year away. They’ll renovate and then decide what to put in here. I have no idea. For all the people who’ll miss the store, I’m sure they’ll be sad if a Prada or something comes in, some kind of boutique. But some people will think, thank God that bookstore’s gone—now we can buy handbags.

What’s the worst thing your bookstore could turn into? I don’t know. A gentleman’s club?

Your first bookstore was gonna turn into an ice cream shop, right? It didn’t in the end. There was a protest. The idea of books being replaced by ice cream was sort of incongruous. But then it became a Japanese restaurant eventually.

You’re about to get $5.5 million. What will you do with that? It’s got to last me the rest of my life. I won’t get another job. Taxes. I had to refinance and pay off the bank.

What will happen to all the books when you close? They still won’t disappear. You can’t give them all away. I’ll have a big sale and end up donating a lot of books. Some people have said I should donate them to Africa. The worst thing would be to throw them out.

What are your favorite books? I don’t have any.

Do people ask you to recommend books? Yeah, I hate that. “What should I get my father for Father’s Day?” I don’t know your father.

Cecilia D'Anastasio is a Brooklyn-based journalist who writes for VICE, The Nation, VICE Motherboard and elsewhere.

#cobble hill
#community bookstore
#john scioli
#pricing out vs. selling out
#original
Do you know the scoop? Comment below or Send us a Tip