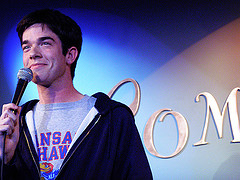 Tonight striking writers and friends will take the stage again for a 2nd Strike Night! Joining John Oliver (The Daily Show), Liz Cackowski (Saturday Night Live), Andy Secunda (Conan) and Maggie Carey, Joe Grossman (Letterman) is John Mulaney -- possibly one of our favorite young comedians today. Mulaney helped host one of our Movable Hype shows last year and currently can be seen on stages around town and on screen at Best Week Ever. Buy tickets for tonight's event here.

Last year we saw you mixing up Tuna-tinis at our Movable Hype show with Nick Kroll, got any new drink recipes for us?
I am currently enjoying a new drink called the M. Night Shyamalan, named for that wunderkind director out of Philadelphia. The recipe is very simple: it’s nothing….with a twist (bam).

Speaking of Tuna-tinis, sometimes in your act you'll mention your past problems with alcohol, how has quitting drinking affected your comedy (if at all)? Is it ever more difficult to deal with an over-imbibed audience?
“Speaking of Tuna-tinis” is no way to transition to a question this serious. When I was drinking my comedy was a lot more about me with a bright red nose and floppy derby-hat trying to stand up straight while hiccupping. People would jeer and throw quarters, which in those days was a lot of money! I was billed as Kid Rummy and everyone could get behind the sensibility. Haaaa. But seriously, no I have ever had a problem with drunk audiences, I like drunk people and like to be around them. Also, most comics I know in New York may have a drink before a show but never get really drunk, so in a way the audience is normally drunker than the comic…in most cases.

How did you get involved with Monday's Strike Night event?
They called my answering service. Riverside Park Answering: “Now Fully Pointless”

Are you a part of the WGA? How has the strike affected you and other writer friends?
I am not a member of the WGA but I 100% support the strike. Friends of mine who are members have been picketing and making real sacrifices to see this through so it is very noble of them. The rallies themselves sound pretty cool. My friends on the picket line have met everyone from Democratic party candidate John Edwards to Thin with Sunglasses party candidate Richard Belzer.

Please share your strangest "only in New York" story.
I was on the L going to Manhattan a few months ago when a homeless guy got on with those 1950s-looking alien antenna things on his head and was holding a saxophone. He started screaming at the top of his lungs “I’M AN ALIEN, I’M AN ALIEN FROM OUTER SPACE. I BROUGHT YOU THIS MUSIC.” Then he played the most screeching off-key shit on his saxophone for 30 seconds or so. He paused and said, “IF YOU GIVE ME MONEY…I’ll stop.” Everyone was like “yeah!” and started applauding because it was such a good bit.

Which New Yorker do you most admire?
That carrot-peeler guy.

Given the opportunity, how would you change New York?
There are only two Max Brenner’s Chocolate By The Bald Man restaurants within three blocks of Union Square. There ought to be more.

Do you have a favorite New York celebrity sighting or encounter?
I had fainted during a blood test (wink) at DOCS on 23rd street and when I finally came to they hustled me out of there even though I was all woozy. When I turned onto Seventh avenue I bumped into Elijah Wood and, he didn’t stop to help me but it’s not his fault, he didn’t know I was sick.

Favorite headlines: NY Post or Daily News?
I just like when either paper tries to make a murder victim prettier after they die. Like the headline will be, “Beauty Slain” and you look at the photo and you’re like ehh, how about “Body Found?”