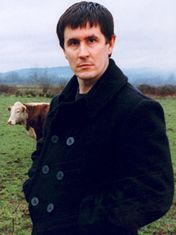 John Darnielle may be best known for his band The Mountain Goats, but he's also the latest blogger with a book; this weekend he's in town as both a musician and an author.

Tomorrow night Darnielle will read from his book, the latest in the 33 1/3 series, about Black Sabbath's Master of Reality; which he wrote through the voice of a 15-year-old boy who's been institutionalized. Before taking a seat at Housing Works on Saturday, he'll get on stage at the Brooklyn Masonic Temple with The Mountain Goats as the band headlines the AIDS Walk benefit (tickets).

Earlier this week he told us about the 15-year-old fictional Roger Painter, playing at the Knitting Factory, and, of course, death metal.

On your Flickr account you caption the photo of your book by saying your first ambition was to be a writer. Did you ever pursue that until now? Do you think you'll publish something else in the future? No, I didn't pursue it - I mean, I did a little, just before I started the Mountain Goats I was writing poetry and starting to get published. But then I sorta channeled all my energy into music for a long time. I am writing another book for sure, I gotta be honest, writing a book gives a sort of jolt that's new and really exciting to me, and I work best when I'm excited.

Why ultimately did you choose writing songs over books? I don't know how most people come to do what they do but for me anyway it's not like I sat down with a list of my options and went "I shall now choose to do this! Because this is what I desire to do!" You know? I am not really a rational plan-it-out dude like that. I'm a nurse by nature and vocation, I just sort of started writing songs one day because I was sitting around my room thinking about Frankie Valli, and things kinda snowballed from there. If writing books was a quicker process I might have ended up being an author earlier.

Are there any other ambitions that have been put on the back burner? Hmm. Gotta think about this for a minute - maybe yeah, I have thoughts of writing symphonic music sometimes. I really doubt I have the melodic or harmonic chops to do that by myself - I would need somebody to push me, you know, and shake me out of my comfort zone. I have thought about asking some people to see if they want to write something really ambitious in that way. But it's more of a vague thought than an ambition, I think the word ambition is maybe kind of dangerous. I prefer "thoughts."

Did you learn anything new about Black Sabbath writing this book? Oh for sure - I hardly knew the bio at all. I didn't use a lot of the information I learned in the book except as background, but, like, especially all the stuff that happened during the Ozzy's-absence interim - whole huge hilarious incredible story in there, they were on I.R.S. for a minute & there was one album that was basically an Iommi solo joint that they had to call "Black Sabbath" anyway - really this amazing lost-in-the-wilderness narrative that was totally fascinating to me.

Was your first instinct to write it through a character (Roger Painter) other than yourself? Actually I initially called the narrator "John Darnielle," but realized this was a bad idea. But I wanted to tell a story, you know - stories are always what are most powerful for me.

What were you listening to at Roger's age, 15? Lou! Lou Reed all day. 15 was my big year of Lou. I was buying bootlegs, cut-outs, any Lou I could get my hands on. I was the only guy I knew who'd even ever seen a copy of the solo debut. I was listening to Bowie too. By the end of my 15th year I was really started to get into some Iron Maiden if I remember right.

Radar just put out a feature on death metal, and they say, "At its best, extreme metal is music for those who—to adopt the parlance of Black Flag—would rather rise above than skip along." Do you think you keep a balance of rising above and skipping along? Can someone "kind of" like death metal? Sure, I don't think you have to be neck-deep in the stuff to enjoy it - I don't believe in prescribing how people can like stuff. You know, lots of death metal dudes find their own work really funny and goofy - it's just that, unlike indie bands, they don't think they have to telegraph their punches in that regard. You know? It's like, you can put on a deadly serious face and still be cracking jokes.

What bands are you listening to right now (death metal and otherwise)? This morning I woke up and listened to the new Jamie Liddell, which I've been doing pretty much every morning since it came out. Then I listened to Lord Jamar's The Five Percent Album, and I really enjoyed it, so I listened to a Sadat X album. These are the dudes who used to be in Brand Nubian, hardcore 5% dudes. They make great music, I do wish they'd lay off the homophobia but as a death metal fan I'm kind of used to listening to music I dig that's also a little objectionable. Yesterday I listened to old early death metal all day: Sarcofago and Autopsy. Gotta say fuck yeah to Autopsy, that there is one of the best bands ever. So is Sarcofago of course. Also really enjoying the new Breeders album.

A few years back you played Knitting Factory and said whenever you came back after that, you'd always play there, but the venues have gotten bigger and bigger since...what gives?! Yeah I sorta didn't expect things to get as big as they did. People complain mightily if you keep playing rooms that're too small to hold all the people who wanna get in - the rooms get uncomfortably packed, half the people inside are pissed that they can't get up close enough, people email me to say "your show sold out before I could get tickets, c'mon be a bro and guest list me and my friends, eh?" and it just becomes clear that you gotta move up to bigger rooms in order to keep people happy. Except the people who're taking notes about the drunken ramblings of a guy who's just finishing up a good set at the Knitting Factory of course ;)

Do you have a favorite place to play in NYC? At this point I don't, really - we've been moving around a little the last few times through. The place I'd want to play most is the Sugar Bar, though - kind of a dream to meet Ashford & Simpson, they're legends to me.

Do you have a favorite "only in New York" story? I am sorry to report to you that I don't. Only the stories I make up are interesting, my real-life stories tend to be of the "I had a delicious sandwich and then I watched Law & Order" variety.

Which New Yorker do you most admire? This is a tough question and it depends on whether you want natives-only or people who came to be from NYC. If the latter I gotta go with either DJ Kool Herc. If it's gotta be natives, gimme Edith Wharton.