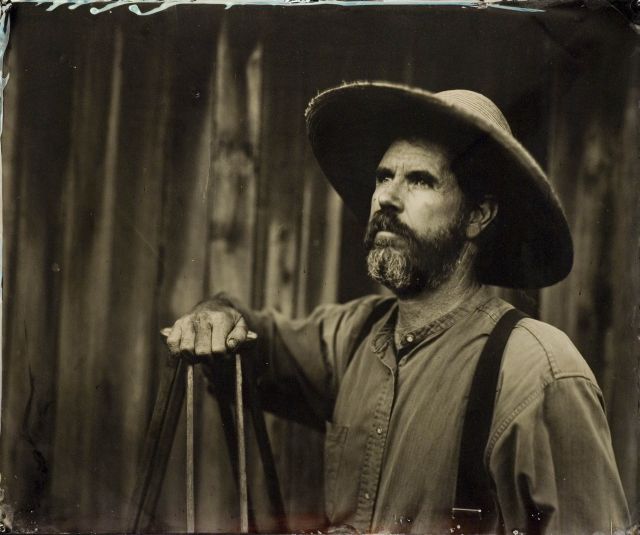 Noah Kalina, the photographer who made a splash by taking a snapshot of himself every day for years, now has some unusual competition: John Coffer, a master of nineteenth-century tintype photography, is unveiling his series “The Daily Tintype” tonight at Gerald Peters Gallery on East 78th Street. The willfully anachronistic exhibit features 365 tintypes from his daily life, one per day from 2007. 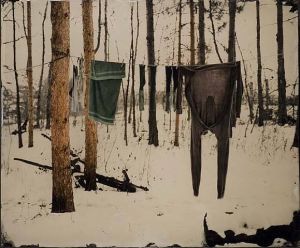 Coffer (pictured above) himself is quite a character, as a Times profile from 2006 revealed; he lives alone in a self-built one-room cabin in the Finger Lakes region of Upstate New York without a phone, plumbing, electricity or automobile. For food, he farms the land and raises livestock. Bathing during the winter happens just twice a week, so if you see him at the opening tonight be glad it’s spring.

Of course Coffer isn’t a complete Luddite, he does have a computer (powered by solar panels) that he uses to animate his tintypes into movie sequences. The tintypes, popular in the Civil War era, were something of a lost art until Coffer began experimenting with the technique in the early ‘80s. The photographs are created with an archaic wet plate collodion process, which yields a prepared metal plate with no negative, meaning that every photograph Coffer creates is an original. Those from The Daily Tintype series are all on sale starting tonight, and offer a unique view of Coffer’s decidedly individual lifestyle.

Opening reception tonight from 6:00 to 8:00 pm. Gerald Peters Gallery is located at 24 East 78th Street. Coffer's work will be on display there through April 25th.