The Global Citizen Festival will take over Central Park's Great Lawn on Saturday, delivering a free for a good cause concert to New Yorkers. Coldplay will kick things off at 4 p.m., followed by Ed Sheeran, Beyonce, and Pearl Jam. The whole thing is hosted by Stephen Colbert, and the special guests range from Nobel Peace Prize Laureate and Malala Fund co-founder Malala Yousafzai, to Leonardo DiCaprio and Kerry Washington, to the newly announced Michelle Obama and Joe Biden.

"We are truly overwhelmed to have the support of Vice President Joe Biden and the First Lady of the United States, Michelle Obama," Hugh Evans, co-founder of the Global Citizen Festival and the Global Poverty Project, said in a statement. "Vice President Biden has been a fierce advocate for America's leadership role in global development, all the more pertinent on the eve of the launch of the United Nation's Global Goals. We are thrilled to give the Festival stage to Mrs. Obama on Saturday to tell the world about the Let Girls Learn initiative, and look forward to supporting this historic campaign over the years to come."

Of course, all these big names also mean a massive crowd, so avoid the area if you aren't attending: 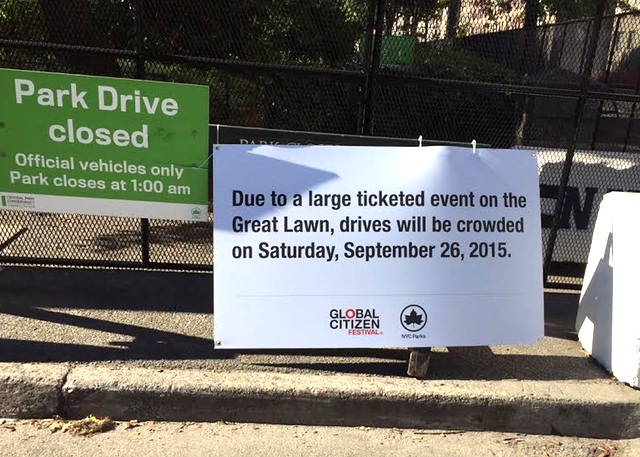 The concert is entering its fourth year in the park, and while the show is free, attendees needed to earn their spots by taking "actions"—including writing letters to world leaders, making phone calls to elected officials and signing petitions. The event is meant to raise awareness and help fight against inequality and world hunger.

For those not in attendance, the show will air live on MSNBC and MSNBC.com from 3 to 10 p.m. ET. YouTube will also livestream it at youtube.com/globalcitizen.

#central park
#global citizen festival
Do you know the scoop? Comment below or Send us a Tip