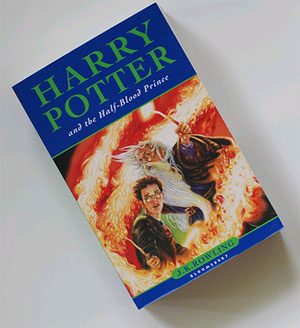 Harry Potter author J.K. Rowling spent the past week meeting with school children across the country as part of her Open Book Tour. Greeted like a rock star in Los Angeles, she told the crowd she isn't immediately writing the Harry Potter encyclopedia. And last night was her final stop, an event at Carnegie Hall, where it appears she saved for the best for last, as she spilled the beans about various characters during a Q&A.

She discussed Neville Longbottom's love life as well as what Remus Lupin and Harry's parents did after graduating from Hogwarts. Most notably she discussed Hogwarts headmaster Albus Dumbledore. From the Leaky Cauldron:

Did Dumbledore, who believed in the prevailing power of love, ever fall in love himself?

JKR: My truthful answer to you... I always thought of Dumbledore as gay. [ovation.] ... Dumbledore fell in love with Grindelwald, and that that added to his horror when Grindelwald showed himself to be what he was. To an extent, do we say it excused Dumbledore a little more because falling in love can blind us to an extend, but he met someone as brilliant as he was, and rather like Bellatrix he was very drawn to this brilliant person, and horribly, terribly let down by him. Yeah, that's how i always saw Dumbledore...

I had to give you something to talk about for the next 10 years...Just imagine the fan fiction now.

Awesome. And the first question during the Q&A was from Kristen Cuzco of Staten Island, who asked, "If you could marry anyone from the Harry Potter series, who would it be?" Aw.

The Leaky Cauldron will be posting a full transcript later, but their article has lots of details for Potter fans. And next spring, the production of Equus starring Daniel Radcliffe is expected on Broadway.