J.J. Abrams Takes on a Puzzle Home Featured in Times 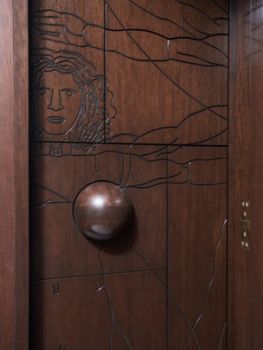 Last week the NY Times' House & Garden section took a look at the mysteries planted by an architect in a ritzy Fifth Avenue apartment. This week, The Hollywood Reporter and Variety report that Paramount has purchased the rights to the article for a feature to be produced by J.J. Abrams. Writers Maya Forbes and Wally Wolodarsky have already been hired to adapt the piece into a film.

Times reporter Penelope Green told the story of an affluent Upper East Side family and their luxury apartment, which they had renovated by an architect who somewhat secretly included hidden puzzles and codes for the parents and four children. The 4,200-square-foot pre-war co-op now doesn't just feature views of Central Park, but personally designed fun by architectural designer Eric Clough, "who devised an elaborately clever scavenger hunt built into the apartment that involved dozens of historical figures, a fictional book and a soundtrack."

The hidden features took four years to create and install, and Clough absorbed most of the cost by putting in many unpaid hours. He also enlisted the help of more than 40 friends, creative in their own right and intrigued by the mystery he was manufacturing. Check out more photos of the project at the NY Times and 212box (select "Fifth Avenue" from architecture projects).

The studio reportedly paid a mid-six figure price for the article--it's unclear who gets that money (the Times and the reporter? the family? the designer? everyone?).