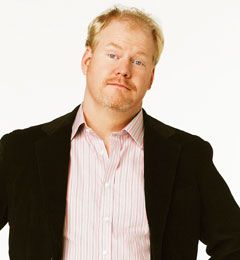 Jim Gaffigan might be the last of a certain era of comedians as a stand-up who simply does wry, observational jokes and yet still commands a great deal of respect from both the mainstream and also as a "comedian's comedian." He makes frequent appearances on Late Night, both performing stand-up as well as premiering webisodes of Pale Force, the series that animates Gaffigan and Conan O'Brien as underfed superheroes. Gaffigan is recognizable from around the dial where it's from My Boys, the TBS sitcom he co-stars in or a series of commercials he did for Sierra Mist. He's a transplant from Indiana who is married and raising two kids near the Bowery. He'll be performing at Town Hall from November 26th through the 30th.

Glad we could work this out. You had to go to your office, right? Yeah, my wife moved me out of our apartment for the moment. Sometimes I try to get work done there, but if I have my two young kids around, it’s pointless. They’ll be crawling all over me, and it’ll be all, ‘GET OFF OF ME!’

How do you like living downtown with kids? Well, you know, it’s a walk up, which isn’t good when they’re both asleep. But it’s good. I was hoping to raise my kids in New York. It would be great if we had an elevator building, but the whole ‘buying an apartment’ thing seems insane.

With the state of things, I keep expecting to hear that it’s going to become more realistic. Yeah, even the people talking about the economy—you can kind of get a whiff of bullshit where they don’t know what they’re talking about. Like everyone is starting to come across like Bush now. ‘Oh wait a minute, that guy’s lying, too.’

So when did you look in the mirror and decide to name this ‘The Sexy Tour’? You know, it’s obviously a joke. I thought it was pretty obvious I’m joking. But occasionally there’ll be like some local promotion thing that Comedy Central will try and get—like in Clearwater or Tampa—and they’ll be all, ‘Well we don’t want anything to do with The Sexy Tour.’ Are you kidding me? I’m like the cleanest comic out there. Take a look at the picture—it’s a joke.

Isn’t sexy one of the cleanest words out there at this point? I chose the name because I think it’s hysterical how sexy is used as an attribute to sell things that are exceedingly not sexy--like sweatpants. I’m also just essentially a substance comic. People are not coming to my show to see what I’m wearing. There’s no celebrity. People who like comedy are coming to see what new material I have. And I just thought sexy was the complete opposite of that.

So it won’t be affecting your wardrobe? I mean, I’m gonna be wearing a bikini. But other than that…

Who’s the sexiest working comic out there? Besides me? I don’t know. I think it’s really funny when there’s sort of character-y guys who will achieve some success in the entertainment industry and it’s a boost to their ego where suddenly they’ll think that they’re studs. You’ll see a photograph of someone and you’ll be like, ‘Wasn’t he a nerd?’ And all of a sudden he’s kind of a stud. So it’s a play on that, too.

On your first season of My Boys, the show was sponsored by Match.com and there would be a lot of mentions of it. Has anyone ever told you they met on Match as a result of your show? People don’t come up to me about My Boys all that much.

As someone who’s been a working comic for a long time—and a pretty polished one at that, do you feel like there are more stand-ups on stage reading out of notebooks than there used to be? When people do an hour special, there’s one philosophy: you do that hour of material, you throw it away, you start from scratch. That’s like what Seinfeld did in that movie Comedian. And then there is another philosophy--particularly when you’re doing an hour in a theater. If people are paying thirty bucks to see you, you kill for an hour. So when people toss out their hour and start from scratch, your first couple months are really weak. But if you’re a social satirist or a storyteller, it’s not that bad. But being an observational eccentric guy like me, I can’t throw out the hour cause it takes so long to come up with material about—you know—soda. But some comedians--like Chappelle--can just go up there and just talk and come up with material. For me, if I’m gonna be up there for an hour and fifteen minutes, my intention is that that hour and fifteen minutes is an A.

How much does the type of venue affect the act? Well if it’s a really great underground room, you do wanna go there and try it out. Because in a great underground room there is an experimental tone in the room. Now if you do “Invite Them Up,” you could never do stuff from an old album. Comedians are also a lazy bunch. And some people work that way to keep it fresh. What makes those alternative rooms so special is that that audience craves spontaneity and the freshness of an idea.

Is Pale Force going to move to 11:30 in LA when Conan takes over The Tonight Show next fall? We’re doing a DVD that’s going to come out in February. But if you’re gonna do a web series—particularly an animated one—it’s a labor of love. They’re probably gonna have to change that show up a bit. So I don’t even know if anyone’ll even have time to do it.

With Conan on so late, you and I might be up at that time, but most people don’t get an opportunity to watch. So I think people are gonna surprised at how good he is. He’s really good at that job. He’s gonna be exposed to so many people and I think it’s gonna be an enormous success. I think that really funny people is always good for comedy.

And people who like Conan, it’s not some teenage crush—it’s substance. The guy’s funny. We’re not watching to see what kind of tie he’s wearing. I’ve done that show so many times and you see him in these impossible interviews and he pulls them off.

Do you have any good ‘Only in New York’ stories? Well in New York, there are people that recognize me, but they don’t know who I am. People in New York will say ‘who are you?’ in an accusatory way like you’re misleading them. Then people will keep their ego in check when people go up to me and go, ‘I’m a big fan of yours. I love your work. I loved you in Boogie Nights.’ There are a lot of people who think I’m Phil Hoffman. Or one time I was walking down Houston and a guy stopped me and it was like, ‘Hey hey can I take my picture with you?!’ So then I took my picture with him and he says, ‘Who are you??’

When you do get recognized correctly, how do people know you? There was a time when comedy nerds--and I consider myself a comedy nerd—they used to come up to me and be, like ‘Hot Pockets.’ And then it got to the point where I’d be in an airport and someone would spot me and say, ‘Hey Hot Pockets!’ Now I’ll be walking down the street and some drunk guy coming out of a bar in a tank top and yell ‘Hot Pockets!!!’ I don’t know if he saw it on You Tube or maybe he was on a bender. But he was on the edge of homelessness and he’s yelling ‘Hot Pockets!’