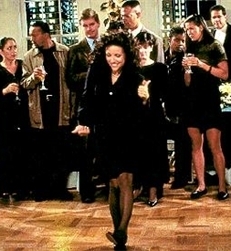 Yet more proof Ann Coulter likes to hear herself talk - and that talk shows like that! She appeared on The Big Idea with Donny Deutsch, and talks about how Jews need perfecting - "we just want Jews to be perfected, as they say" - to the point of being Christians. Deutsch was shocked, argued with her, and went to commercial by saying, "Ann Coulter, author of If Democrats Had Any Brains, They'd Be Republicans, and if Ann Coulter had any brains, she would not say Jews need to be perfected. I'm offended by that personally."

Media Matters has a transcript of the show, and there was a pretty wacky part leading up the "perfecting Jews" moment.

COULTER: I give all of these speeches at megachurches across America, and the one thing that's really striking about it is how utterly, completely diverse they are, and completely unself-consciously. You walk past a mixed-race couple in New York, and it's like they have a chip on their shoulder. They're just waiting for somebody to say something, as if anybody would. And --

COULTER: No. In fact, there was an entire Seinfeld episode about Elaine and her boyfriend dating because they wanted to be a mixed-race couple, so you're lying.

DEUTSCH: Oh, because of some Seinfeld episode? OK.

Interesting, Seinfeld is a show created by some "imperfect" Jews! If anything, we'd like this to be a sign to the bookers at talk shows: Stop the Ann Coulter madness and stop inviting her on.