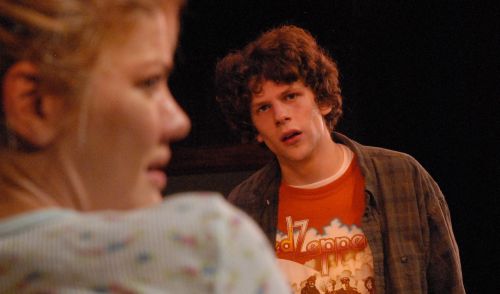 Jesse Eisenberg was still in high school when he struck indie-film gold with his performance alongside Campbell Scott in Roger Dodger, one of 2003’s funniest and most affecting films. He’s since gone on to pull his weight in Noah Baumbach’s Park Slope rhapsody The Squid and the Whale, M. Night Shyamalan’s The Village and, currently in theaters, The Hunting Party – to name a few. (He’ll soon enjoy an even higher profile thanks to his starring role in Adventureland, the next movie by Superbad director Greg Mottola.) You can currently catch Eisenberg onstage at The Atlantic Theater Company’s production of Scarcity, a gritty black comedy about low-class domestic strife in moneyed Western Massachusetts. After repeated attempts to interview Eisenberg were stymied by his malfunctioning cell phone, we said the hell with it and e-mailed him our questions. (Happy ending: after telling Verizon they were jeopardizing his Gothamist interview, Eisenberg got a new phone for free.)

Your film career continues to heat up. Why do an off-Broadway play right now? I tend not to think of my acting career in any long-term way. It is a unique profession in that most jobs end after about 2 months, so though I have some movies coming out soon, I always feel like it could end at any time. In terms of the play, I read it and loved it and the role, I love the Atlantic Theater Company, it fit into my schedule so it seemed like a wonderful opportunity. I judge each project based on its own merits rather than how it will fit into a larger career path. It is an unpredictable lifestyle so it seems foolish to plan anything.

I am also interested in pursuing a playwriting career. The writer of Scarcity, Lucy Thurber, arranged a reading of my play for next month. As I was finishing up writing the play, I read Scarcity and I was very interested in working with the people behind the show.

What motivated you to do this play in particular? Having been in a few moderately popular films, I am often thought of by directors for films, but the roles are usually very similar to the roles I have already done. Luckily, the writer and director of Scarcity had not seen me before, so they did not have any preconceived ideas about me. The role in the play is quite different from the roles I have done in movies so I think this played in my favor. It seems pretty hard for actors to break out of certain types. It is unfortunate and ironic because this is what we all train to do.

There's some really intense emotional stuff in Scarcity. In some of the films I've seen you in, your characters stay pretty bottled up. Was this role a challenge for you? This play has been such a relief for me creatively. I feel closer to this role than others that I have done and yet I am infrequently thought of for these types of characters. It's been my experience that actors want to be intensely emotional. It makes you go a little crazy if you do it everyday for a long time, but it is also a wonderful release. It feels incredible to fully invest in the play every night to such an extent that you feel residual emotion hours after the play is over.

With all the film work you're doing, wouldn't it be better to live in L.A.? I get some street cred living in New York. And people think you're a better actor -- hiring a “New York guy” for a film in LA is like the producers splurging for expensive lighting equipment. Also, the last film I did was in Bosnia, the next movie I'm doing, Adventureland, is filming in Pittsburgh. The last play I did, ironically, was in Los Angeles, so I don't think it's necessarily more fruitful.

My sources tell me you're attending college? True or false? If so, what is your major? I am going to the New School University, I'm a liberal arts major with a “focus” called Democracy and Cultural Pluralism.

Why major in something other than acting? Do you see yourself moving on from your acting career to something else in the future? I would like to write – primarily plays. I would also like to know about the world – this seems important regardless of your profession. My girlfriend and I have traveled all throughout Asia and a little through Latin America and I have traveled through Eastern Europe, and I am interested in world politics.

You're going to start shooting Adventureland soon, right? Yes, it begins in October.

What's that about? It's semi-autobiographical for the director Greg Mottola; about his experience getting a shitty summer job at a Long Island amusement park.

Was the casting process for such a major role any different? I actually didn't audition for this film. I met with Greg and ate salad and he cast me. I have to audition for 2 lines sometimes in movies I don't even love that much and don't get cast and then something like this comes along and I get free salad. I never understand it – I have friends who are fantastic actors – some of them even very well-known – who audition for degrading roles they don't get and are offered roles in great things without auditioning. It's an inconsistent process.

I read somewhere a while back that you were going to be in a film directed by Bob Odenkirk. What's it about and what's the status on that? I doubt that this movie will ever get made. First of all, it's called the fuck up, so investors are wary. It's a great movie though, and I hope Bob is still interested in pursuing it now that he has directed several larger films.

Is there a role you wanted very badly but didn't get? So far the roles that I have really wanted to do, I have been hired for. I think subconsciously I want to do the things I think I can realistically do in the first place so that’s part of it, but I really loved Roger Dodger and The Squid and The Whale and I basically begged Greg Mottola to hire me for Adventureland. So I feel lucky.

How did you get involved in acting? I did children's theater growing up as a way to get out of school. I did anything to get out of school and I was lucky enough to get into Roger Dodger in my senior year of high school. I don't think I would have pursued acting as a profession had I not done that film. I don't think I am brave enough to pursue something so unpredictable, but I got lucky and decided to try and capitalize on it.

Did you ever help your mom with her clown act? You have good sources. Wow. I denied that my mother was a clown until I was 15. I helped her tune her guitar on Saturday mornings, though.

In addition to your acting career, you're also a website creator. Can you tell us about OneUpMe.com? How did it start? OneUpMe.com is a wordplay website; there are about 850 users from all over the world who try to “one up” a clever phrase I create daily. For example, I write “He was like evolution: not employed by the catholic church” and users sign on to the site and try to “one up” the second part of the phrase. Such as: defended in court by Clarence Darrow or makes pandas nervous or has plans to remove a toe.

One up me. She was like a bad cell phone: always turned on at the movies. That's good. I'll use it.

Do you have big plans for any other blogs or websites? I own Yugoslavio.com, but can't think of anything funny for it.

I see you around the East Village a lot. Is that your ‘hood? My girlfriend and I used to live there but moved to Chelsea recently. I will move back when my apartment turns into a store that only sells muscle tees.

What’s the frequency of getting stopped on the street by someone who recognizes you these days? Once or twice a day, probably. It makes you not want to do stupid movies because you end up having to talk to people who like stupid movies.

Please share the most strange or awkward encounter with a fan in public. I get mistaken for a guy in the play Spring Awakening at least once a week.

Please relate one of the wildest things that's happened to you in New York City. I got attacked last week by some kids. I was riding my bicycle near the South Street Seaport and some kids slammed me into a concrete wall. I was taken to the emergency room in an ambulance and they arrested a kid who is in jail now. I have to go to City Hall to testify tomorrow morning. Ironically, my friend who I was riding with – who was also attacked – is an English teacher at Crossroads Prison, where the kid will probably end up.