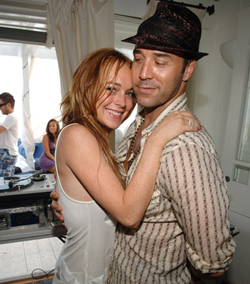 [CASTING UPDATE BELOW]Entourage star Jeremy Piven has gone from calling out sick to simply quitting his current gig on Broadway in David Mamet'sSpeed-the-Plow. Mamet tells Variety: "I talked to Jeremy on the phone, and he told me that he discovered that he had a very high level of mercury. So my understanding is that he is leaving show business to pursue a career as a thermometer." (Promises, promises.)

Piven's publicist has not elaborated on the illness. But theater-insider Michael Riedel at the Post hears that the show's producers aren't buying this mercury poisoning business and, because Piven is contractually obligated to perform through February 22nd, they may call in their own doctor to get a "second opinion." Sources also tell Riedel that Piven has been complaining of "exhaustion" for weeks and has been arriving late to performances each night. Others note that the Runaway Jury star hasn't been too sick to party after performances and is a regular at Lower East Side douche mecca The Eldridge.

It's unclear what this means for the generally well-received revival, which was averaging 69% attendance last week—not completely terrible considering that nobody goes to see plays anymore. Without a big star from the tee-vee to draw the provincial types (no disrespect to Mad Men, but Elisabeth Moss is no Ari Gold) the production will probably be plowed under before its scheduled February closing. At yesterday's matinee, more than 300 audience members demanded a refund when they heard Piven had cancelled, and investors have yet to recoup their $3.5 million—though they had expected to break even next week.

UPDATE:Playbill has it that Mamet veteran William H. Macy will take over the role from Tony-winning understudy Norbert Leo Butz! Why didn't they think of that in the first place? Macy will step in on January 13th and stay through the end of the run. Meanwhile, Piven's doctor Carlon Colker (Beth Israel Medical Center) defended his diagnosis to Variety:

Jeremy has been a trooper [sic], and did everything he could to fight extreme fatigue, among other things, since the condition was diagnosed. It was not his decision to step away from this play, it was mine. I think it was in the best interests of his health to do that.

His level of mercury was uncharacteristically high, one of the highest we’ve seen. We’re not sure if this is from his diet, which is high in fish, or Chinese herbs, which he’s been a fan of in the past, or a combination of both. He needs convalescence and rest and treatment, and this will clear his body and he will be back in action very soon. Again, it was not his decision, it was mine, along with a board certified cardiologist from Yale who I won’t name, but who has 29 years of experience.

Dr. Colker's also telling jokers like Mamet to leave Jeremy alone: "Any insensitive comments like that are not only unkind and unfair, they reflect a profound lack of understanding of a problem that can actually kill. He did the best he could to hang in there as the rigors of the show continued to increase in intensity, which, coupled with his symptoms, became increasingly difficult to contend with. I felt the need to step in and make the decision for him to stop."