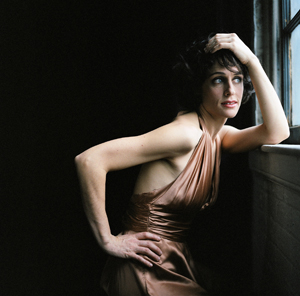 Jenny Scheinman is a catalyst of beautiful moments. Once, while recording an album with Lucinda Williams she coaxed the whole crew up to the roof for a candlelight dinner. Magical. Another time, she brought Paul Motian and Jason Moran together for a trio concert at the Village Vanguard. Superb. And one night, she invited banjo master Danny Barnes to join her at Barbes. The result: a space jammed with banjo players. Terrific.

Congratulations on two fantastic new records. The photograph on the cover of Jenny Scheinman is beautiful. Where did you get that stunning dress? I'm glad you asked! My dear friend and role model Amber Darraugh lent me the corset top and the bottom is two slips that I've had for years. Amber dances with Mark Morris, has a burlesque show with Lady Rizo and The Assettes and is generally a stunningly sexy and soulful human being.

You've always loved singing. How does it feel to put out your first fully vocal album? Great... cathartic.. risky... fun...

The album features songs by Bob Dylan, Tom Waits, Lucinda Williams, and more songwriting greats. What criteria did you use to select your songs? Out of a huge pool of songs from my life in music I chose songs (and it was hard, there are a lot of good ones) that I wouldn't be here without.

Have you gotten any feedback yet from any of the songwriters? Lucinda said: Jenny, I just listened to this... your stunning version of my song. I can only say... that it took me back to a special time. Thank you , thank you.... so much. Love, Lu

What's your favorite track on the album? Hmmm... I actually really like some of the originals. "Come On Down," "Newspaper Angels," "The Green," "King of Hearts" I think is the greatest song on there. I don't know, depends on my mood.

Two years ago, you described what you called "your fantasy for your next record." It included a traditional jazz format, including key players like Jason Moran, Bill Frisell, and an orchestra that could improvise with the other players. "Talk about over my head, it's one of those things," you said. With Crossing the Field, you did it. Did everything work out as you hoped it would? Yes. Nice to be reminded, thanks.

Was there a conductor leading the orchestra through the improvisations? There is one live track on the album, Einsamaller, and that had a conductor - Eyvind Kang. The others were section led by Johnny Gandelsman, Colin Jacobsen, and Nick Cords (v,v,vla of Brooklyn Rider, and Marika Hughes (cello)

You had concerns about recording it, about how it would work out with so many people, what the structure would be, the process. How did it work out in the end? I am forever indebted to Sascha Von Oertzen's genius organization and meticulousness in making it as efficient as possible (and thus affordable) and for all the musicians for giving it their all.

The music on Crossing the Field, was written during a getaway to Hawaii. Does hearing the album now bring back memories of that time? It did for a long time, now less... I find that songs grow out of their childhoods as we do, and in releasing them in to the world once they've matured, they hopefully reflect themselves more than they reflect me.

You're making your film debut this year in The Butler's in Love, a short film directed by David Arquette. Tell me about your character. I am a musician in a band at a fancy party on the night in 1912 when absinthe was prohibited. I went into it thinking I would just play background music but they ended up getting me to sing a song, "I Wonder Who's Kissing Her Now," right into the camera (a huge 3D camera). I saw it as a sort of emotional reinforcement of the lovestory between a butler and a guest. I'm attracted to lovesongs about obsession and this was a perfect one for this..

How did you hook up with the project? My cousin and dear friend Finn Taylor is a movie maker (Dreams With The Fishes, Cherish, The Darwin Awards) and has directed David Arquette for years. He's also a mandolin player and is working on a biopic on Bill Monroe. That was the connection.

You play regularly with Bill Frisell, Madeleine Peyroux, you made an album a couple years ago with Lucinda Williams, who haven't you played with that you'd really like to? Hmm... these are some of the greats that I haven't yet played with. I'm not sure they'd all be equally fun to play with or if I'd be appropriate for any of them, but in the spontaneous spirit of an interview: PJ Harvey, Dolly Parton, Joe Lovano, Gillian Welch and David Rawlings, Feist, Guillermo Klein (he's one of my all time favorites), Brian Blade, Mark Ronson.. There are a bunch of people I've played with just a little bit that I would love to play with more intensively - or in my own band... Larry Campbell, Tony Garnier, Paul Motian, Lou Reed, Ben Street, Kenny Wollesen - E=I just can't get enough of him, Sam Shepard - he's a GREAT singer, made me cry when he sang "Sugar for Sugar Salt for Salt if You Don't Get Along It's Your Own Damn Fault." All off the top of my head here...

Where are your favorite places to play in New York? Barbes. I'd like to find a place a little bigger where I can play a little louder but still feel at home.

What was the last great show you saw in New York? Robbie Fulks and Robbie Gjersoe at The Mercury Lounge. Charlie Burham at Jalopy.

What stands out as the most fun you've ever had on a tour. South America with Madeleine Peyroux (Matt Penman, Aaron Goldberg, Dan Rieser), Europe with Bill Frisell doing the music of John Lennon (with Greg Leisz), China with my own band (feat Allison Miller, Pete Scherr, Masako), Zagreb with my own band (Steve Cardenas, Ben Allison), the Northeast with my band (Nels Cline, Jim Black, Todd Sickafoose).

You have said that movies inspire your music. Has anything come out in the past two years that really moved you musically? The Dylan movie was freeing. The opening of There Will Be Blood with that score and then deafening silence was memorable. Opening Night with GIna Reynolds... Killer of Sheep.

So now you've made a solo record, you've been in a movie, you've successfully realized a dream, with Crossing the Field. What's next? Tour the world. My idea for my next two records at the moment (I go through a lot of ideas before one materializes) are: an instrumental record called Mischief and Mayhem with Nels Cline, Jim Black, Todd Sickafoose that is real sparky and athletic, has a little punk rock in it, a lot of freedom... and a second vocal record focusing on my originals - i have four finished and another dozen or so bumpin' around up there.

You've had some really fantastic, and interesting experiences in New York, from New Year's 2000 with the Big Apple Circus, to attending a 20-hour Chinese Opera performance at Lincoln Center. What else comes to mind when you think about amazing times you've had in New York? Finally saw The Ring Cycle this year (Wagner). New York delivers. Just walking down the street is entertaining if not totally transforming.

Have you had a chance to see Rufus Wainwright yet? Yes I love him. Also really love his sister.

#bill frisell
#crossing the field
#interview
#Jason Moran
#jenny scheinman
#lucinda williams
#paul motian
Do you know the scoop? Send us a Tip
A new Gothamist is coming! We’ve moved comments over to our beta site. Click here to join the conversation and get a preview of our new website.