Solar One is New York City's first solar-powered “Green Energy, Arts, and Education Center,” leading the way in getting city dwellers to be a bit more environmentally responsible. They do this by not only reaching out to the community and educating through games and workshops, but also through some great events, green markets and more (they even have their Solar2 building coming soon, watch a video about it here).

This Thursday they launch their summer 'o fun with an event that includes 14 installations, 2 deejays and 1 band (more info here), so we thought we'd ask one of the people in charge more about the organization.

What is your role at SolarOne?
We are a small + young organization, so most of us here wear many hats. I am the "Special Projects Coordinator" and mostly I help to organize events.

What is the overall goal of the organization?
Our mission is to increase energy and environmental awareness and inspire action through public education and cultural programming. We give free K-12 education classes and family workshops, run a lecture series called the Green Renter and put on outdoor events in the summertime, including Citysol, a film series and a dance series. We like finding new ways of using our site and space, which includes a 3-block all-native-plant park, to address relevant NYC-specific environmental challenges. We'll be building a new building ("Solar 2") at our site next year, which will help us expand our reach.

Does SolarOne have any tips for the average New Yorker to make their day to day life more "green"?
There are a million ways, but in general, just being cognizant of your energy use and where your energy comes from, and the range of impacts that it can have on health and the environment can go a long way. Turn things off when you're not using them. Replace inefficient appliances. They are all pretty common sense but they add up. One of the first things we tell people to do -- because it's so simple -- is to switch out their lightbulbs from incandescents to compact fluorescents (CFLs). If every NYC household changed just 2 bulbs, the electricity conserved would equal the same amount generated at the 14th Street ConEdison power plant in Manhattan. Another easy thing to do is to switch to a green energy power provider -- at Citysol, ConEdison Solutions will be holding a green power sign up drive -- come out, bring your electric bill, switch to a wind power package, and we'll give you free beer. For real!

But people should also understand that being a politically engaged citizen - an environmental voter - is probably the most significant contribution that they can make at this point. Much of what needs to be done requires policy shifts at very high levels. We need to make noise and hold our leaders accountable. 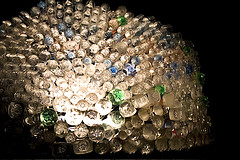 What were your thoughts on Live Earth and the idea of a having a huge event like that in the name of the environment?
I honestly didn't follow the Live Earth coverage too much (too busy putting Citysol together!). Huge productions like that always tend to generate movement backlash, but any positive awareness and new attention it generated for the climate crisis is of course a great thing. The criticisms directed against it I thought were pretty lightweight. All in all, a good thing.

Please share your strangest "only in New York" story.
I'll stick to the postive and recent -- working all day Saturday and then deciding last minute to bike like mad to the Brooklyn Bridge to catch the Boredoms' 77BOADRUM from the bridge -- watched it through a lane of traffic while tourist couples and families walked by behind the crowd with "wtf?! is going on down there" looks on their faces -- bizarro, but totally worth it + only in New York!

Which New Yorker do you most admire?
Nikola Tesla

Given the opportunity, how would you change New York?
Smarter policies to promote solar power in the city. Way less traffic congestion. More housing that working people can pay for without breaking the bank. Increased public land use. Free public transportation for all!

Under what circumstance have you thought about leaving New York?
NYC presents many circumstances for leaving it: gross summer heat, waterfront condo construction, vicious ambitions, etc. but I always get reeled back in by its potential to influence and do/say/make amazing things. It's not so much that you are in a constant love affair with the city, it's like what Colson Whitehead wrote: "Once you've been to New York, every other city is ruined for you."

What's your idea of a perfect day of recreation in New York?
Biking with my bike brigade, the Delicious Beverages, + drinking homemade lemonade.

What's the best subway line?
the 7