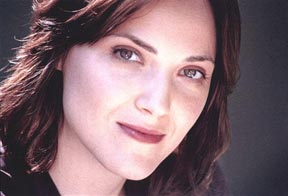 Jen Kirkman does it all. Hilarious stand up, talented improviser, and a terrific writer. She's in town to do some stand up and to perform at UCB's 9th Annual Del Close Marathon and Gothamist sat down with this triple threat from LA to discuss growing up on a golf course, the pursuit of fame, and sassing customers.

You just released your first CD and are also a cast member on VH1's Acceptable TV. What else are you working on?
I'm going to be doing what they call a Pod for Al Gore's Current TV. It's a one and a half minute thing analogous to a correspondent piece on The Daily Show. I'm reading letters to the president that I wrote where I'm asking him questions and criticizing him, but then it turns into me telling him about my day. I'm shooting a test one of those soon and hopefully that'll turn into something that goes out bi-weekly.

What sort of reply have your letters gotten?
Nothing! I wrote and sent out eight once a week last summer. I assumed that no one read them and that once a month they send out some, "Thanks for supporting the president," letter even if you wrote, "Fuck off." But I didn't even get that.

Did you ever get a taste of fame growing up?
Someone took a picture of me on a pony when I was little and it ended up in the Needham times and I was just waiting for the offers to come in.

Your father was a groundskeeper?
Yeah, he still kind of is. He just retired this year, but he doesn't let the person who took over his job do his job, so he's still on the course everyday following this guy around. My parents' house is literally on the golf course and it's where he'll probably live forever. He's worked for about 45 years, including the whole time I was growing up. It really shaped every aspect of my life. From me being one of the lower income kids in town, which affected my specific brand of nerdiness.

What was the club like?
It wasn't fancy. It was private, but the sort of place plumbers with money would go to, while doctors went to this club across town. It was a working class club. I felt like I had all of these people raising me. I was constantly going down to the club for free ice cream, hanging out in the grillroom with all the members, and I totally thought my life was like Cheers and I wanted that to be my life when I grew up. They were all alcoholics, though, so it's not quite what ended up happening to me.

Did you work and golf there too?
Everyone in my family waitressed there and I waitressed there when I was growing up. There were some old, wealthy people who were very cheap and old ladies who had to have everything as separate checks and they'd leave pennies as tips. The least wealthy people were blatantly assholes. Guys would throw my tip on the floor and would just be very rude, super demanding, and treat me as though I were stupid. I think that was the lower class people thinking, "Oh, this must be how rich people act," but the rich people acted like assholes in very different way.

When it came to golfing, I was obsessed with the putting green and I'd spend even my summer afternoons on the green putting and pretending I was a lady pro-golfer. I'd imitate the moves I watched them do on TV, like where they put the little marker on the green, squat, line up the shot. I spent my days doing that, but then I took golf lessons and it ruined it for me because I didn't want to play golf as much as I wanted to do the poses on TV.

Did you ever spit in the food of rude customers to get revenge or anything similar?
I worked with this great gritty woman named Suzie who was a single mom that smoked Merit Ultra Lights. I really looked up to her and she was just this sassy talking waitress and we'd sass people back, but I would do it shadowing her. We had a cook named Stan who asked me, "Hey, you ever spit in anyone's sandwich," and I tried it one time and felt really horrible afterward. I didn't even spit on it. I put spit on my hand and wiped it on the bread.

Did you feel compelled to tell the people who ate that sandwich what you did?
God no! It was the old ladies. They would have had a fucking fit.

You mentioned how the only thing you liked about golf was the posing and explored your desire to be famous in your short story Cameo Kids . How else did you strive for fame?
Well, I took that acting class called Cameo Kids, which I thought was a direct pipeline to Hollywood, that somehow all the kids in the class and that they were being phoned and updated of our progress. I once sent a picture to Gary David Goldberg, executive producer of Family Ties, hoping that he would recast the part of Jennifer as me. Then I did local stuff. We had these two news anchors, Chet and Natalie, and they were a married couple on the channel five news team. People thought they were very glamorous and I thought that if I could get their attention that they might do a story about me, which would lead to a media flurry. So I spent a weird amount of time bicycling outside their house.

I know you lived in New York and I wanted to know what would it take to get you back living here?
I'd have to have a steady job that pays well, but I really like it in LA. So, even if someone wanted me on a TV show that only shot in New York, I'd still probably come right back to LA afterward.

How would you change New York, given the opportunity?
I'd change the prices of apartments in Manhattan and having read about this steam pipe incident I would change the infrastructure. I'd add more nature, give all the homeless people homes, and stop all crime. The things I didn't like living there were very specific to my life. I had a day job in Manhattan, but lived in the Brooklyn, so I didn't like the commute. I'd get out of work at five buy have a gig in the city at eight, so I always felt homeless because I'd have a million bags. There was just always a bag and schlepping and I couldn't stand that. I also didn't like when I'd be on the train and they'd announce, "Oh, by the way, we're not stopping at your stop." It just seemed like whatever mood I was in was amplified by the city, so if things were going bad the city would go along with it and make it worse. I didn't like the hot hot summers and the cold cold winters. I remember having a fabulous time, though. It's like how at the end of your life you can't remember anything bad, but I must have been miserable living there because I ran the hell out of there after three years. I don’t remember why, though. I think I was just an idiot.

What's your strangest "Only in New York Moment"?
I saw what I thought was a dead body outside of a deli once. I didn't know what to do so I went in and told the owner and he could not understand why I was informing them of it. For a while, she thought I wanted to park there and finally she said, "Stop trying to save the world!" Also, I learned that only in New York, this might be only in Brooklyn, but these old ladies would sit on their porch and I'd come back from the grocery store and they could see through my bags and this one woman would go, "Why would you ever but that brand of toilette paper when the other one's on sale?!"

Which New Yorker do you most admire?
I love Woody Allen. I was just thinking how much I miss his take on being the awkward male in comedies. Someone just did a piece on that in the New Yorker . I also love Randi Rhodes on Air America.

What would you consider the perfect day of recreation in New York?
I've never been to New York with an Ipod. I used to go on the subway with my CD collection and I loved sitting on the subway and just listening to music and making things up in my head. So, it'd start with me and my Ipod on the subway, favorite songs, making up shit in my head, and then a walk in the park. Dunkin' Doughnuts coffee in the morning and a bagel. Then walking up and down 7th avenue in Brooklyn, shopping in the East Village, drinks at a happy hour somewhere, and then doing a show and going out after.

Make sure to check out Jen's improv troupe MacGuffin on Friday July 27th at 8:30, at Sweet Paprika at the D-Lounge on 101 East 15th at 10 PM later that night, and her appearance at Brooklyn's Union Hall on the 29th at 9 PM.

#al gore
#But I
#cd
#current tv
#daily show
#Del Close
#gothamist
#interview
#kids
#la
#marathon
#Needham
#shooting
#stand up
#the daily show
#tv
#vh1
#video
Do you know the scoop? Send us a Tip
A new Gothamist is coming! We’ve moved comments over to our beta site. Click here to join the conversation and get a preview of our new website.