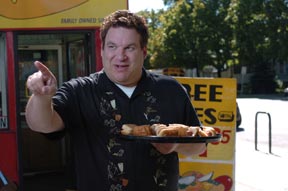 For one night only, Curb Your Enthusiasm's Jeff Garlin is bringing his popular LA show Combo Platter to NYC's UCB Theater. Every installment of CP begins with Garlin asking the audience for a topic that inspires a freewheeling conversation between he and his high-profile guests, in this case Curb Your Enthusiasm co-star Susie Essman and comedian Jim Gaffigan. A true gourmet comedy treat!

Your film, I Want Someone to Eat Cheese With, is opening on the 5th. Is that the first name you went with?
Yeah, I thought about changing it because Larry David didn't like it and kept on telling me I couldn't end a sentence in a preposition. He wanted I Want Someone With Whom I Can Eat Cheese. I think that's the way he joked about saying I should call it. So I looked for other titles, but this one people seemed to like.

You're not only starring in it, but you wrote it and directed as well. Do you plan on doing more directing in the future?
It's the only thing I really want to do, but, on the flip side, beside my own things that I'm writing now, as well as have written and am waiting to hear back on, most of the scripts I get offered to direct I'm not that interested in.

And, for you, what makes for good stand up?
Same thing we just talked about- a sense of humanity. When you're done watching a great stand-up and you leave, you take a piece of them with you. That's really it. There's a sense of them, and a piece of them that you take with you. Everybody else is disposable. Everybody's the same.

What leads to bad comedy?
The greed. Most comedians don't care if they're great. They only want to be famous. And that's most people in general. Everyone's so consumed by fame and greed, and nobody cares about actually being about something.

I had read that you started doing Combo Platter again in preparation for some HBO taping.
I'm seriously considering it, but not for a while. Right now I'm in the process of writing an act. I've done this for twenty-five years, and I think as a stand-up I'd be further ahead if I focused on writing an act with a beginning and a middle and an end, and I going up, I doing it, and getting polished until I'm really powerful. I've never done that before. Generally my format is to improvise from an outline.

Do you already have plans to come to New York to do some stand-up performances in the future?
Yes, but they haven't been confirmed yet. There's something in December, possibly.

Do you have a particular "only in New York" strange sort of moment?
I remember from living there, I wrote this line I always thought was funny. Only in New York can you be woken up by a smell. That happened to me in my apartment. I was sleeping away, and suddenly there's this smell. And I thought," This smell woke me up. I was woken up by a smell from the street."

Given the opportunity, how would you change New York?
I would lower the cost of living to pennies a day. And all the free pudding for anybody who wants it.

Is there a particular New Yorker that you admire most?
Woody Allen. I admire him as a comedian and a filmmaker.

What for you would be the perfect day of recreation in New York City?
I get up, I walk through the park, I go to H&H Bagel and Zebars, I get the bagels, and some whitefish salad and some sliced lox and cream cheese, I go back to Strawberry Fields, sit and eat with a bottle of Yoo-Hoo my lox and bagel and my whitefish. I go to a matinee of a play, or I see a movie. That night I go to dinner at a deli. I'd go down to Katz's. I'd get a pastrami, and that night I'd do two or three shows. That's a perfect day.

Combo Platter will be appearing for one night only with Jeff Garlin, Susie Essman, and Jim Gaffigan on September 3rd at 8 PM at the UCB Theater , 307 W 26th St. I Want Someone to Eat Cheese With is playing a limited release started September 5th. Check local listings for locations and show times.