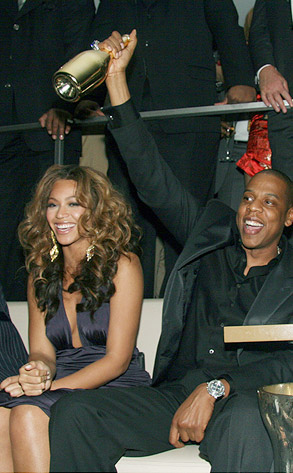 Distributer of royalties, BMI, filed a federal lawsuit against Jay-Z's 40/40 Club yesterday. The performing right organization holds the licensing rights to 6.5 million songs, and apparently plenty of them are being played at the club, the lawsuit cites "unauthorized public performance of musical compositions." In other words, Jay-Z has been holding out and skimping on royalties owed to fellow musicians!

The Post reports that Michael Jackson, R. Kelly and over a dozen music publishers have joined forces against Jay-Z's 40/40 Club, a charge led by BMI. They are seeking "unspecified damages for copyright infringement from the club and co-owners Desiree Gonzalez - who has the primary responsibility for operations and management - and Juan Perez." Jay-Z (real name Shawn Carter) has been kept off the paperwork.

There was no snitching amongst friends involved in bringing this case to court, rather a BMI researcher spent two nights at the club last March. During that time Jackson's "Billie Jean" and "Don't Stop," "Thoia Thoing" by R. Kelly and "Gold Digger" by Kanye West were among several unlicensed songs played. A spokesperson for BMI, Jerry Bailey, said the company has tried to license the 40/40 Club since it opened in 2003, but their attempts have been unsuccessful.

These aren't the only legal woes for the club and Jay-Z, all of this is coming one month after employees of 40/40 filed a class action lawsuit:

Celeste Williams, a former waitress at 40/40, accused the club of "willfully failing and refusing to pay [its workers] at the legally required minimum wage" since the nightspot opened in 2003.

Her lawyer claimed 100 staffers have been ripped off - although club management said Williams worked at 40/40 for only four days in December 2005 - in the suit seeking unspecified damages.

The suit also claims that the club was allegedly keeping a cut of workers' tips. All of this came just after a Philadelphia author sued Jay-Z for copyright infringement. The author claims the 2002 film State Property was based on his novel. Good thing Mr. Carter is so powerful!