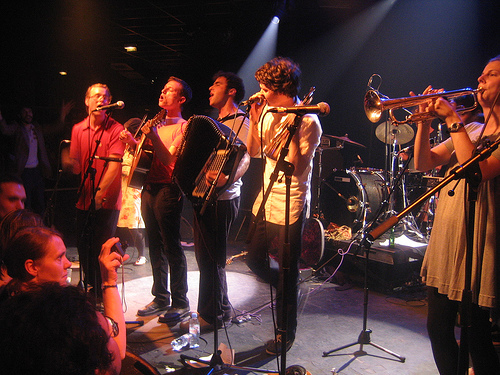 In 2006, at age 19, musician Zach Condon and his band Beirut exploded onto the indie-rock scene with a dramatic collection of Balkan-inspired arrangements for horn, ukulele, keyboards and strings. The bloggers raved, the venues got bigger, the haters left comments. But less than a year later, the teen’s too-sudden indie-rock apotheosis landed him in the hospital for “extreme exhaustion” and forced the cancellation of a tour that included sold-out dates at Bowery Ballroom. Condon has since rallied back and, in addition to a new album coming out next month, has picked up his touring pace again.

We were offered an opportunity to interview Condon in advance of a series of New York concerts, but were warned that he would need a week to respond to an email interview. Not wanting to tire the poor lad out, we kept our questions short and sweet. Nine days after sending them off, a two-man team of Jason Poranski and Paul Collins sent back some cryptic, Dylan-esque answers. Had we known we were actually interviewing Condon’s band and not Condon, we would have also asked them if their front man could use an amanuensis. Or maybe a Red Bull?

You have a sound that's unique in the music scene right now - bringing a Balkan Eastern European sound to a modern day audience. How did that sound first attract you? Through the back. Jeremy Barnes of A Hawk and a Hacksaw, and Kusturica's films.

We've heard you reference Fellini as an influence, can you explain that a bit more? Sweeney is great, but so is Leighton Pierce. Or the Maysles Bros.

Beirut has been one of the bands that got recognized first through blogs. Do you have any thoughts about the blog vs the mainstream media world right now? Blogs are the best thing to ever happen to music media.

Are there any instruments you haven't used live or in the studio that you'd like to? Electric guitar.

What are your favorite instruments? Prepared piano.

Which New Yorker do you most admire? Taylor Mead.

Given the opportunity, how would you change New York? Pay toilets.

Under what circumstance have you thought about leaving New York? Being broke.

Best cheap eat in the city. Mike's Diner (across from Pratt) and Sunset Park Diner and Donuts.