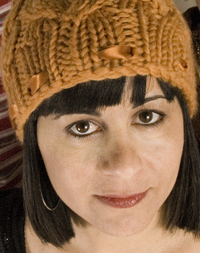 Since beloved Washington State punk band Sleater-Kinney dissolved two years ago into an "indefinite hiatus," drummer Janet Weiss has carved out a new niche for herself in Stephen Malkmus's small family of musicians, the Jicks. Weiss played an active role in the creation of Malkmus's fourth full-length "solo" album, Real Emotional Trash, which came out in March. In its wake she's been tearing up the road in the U.S. and Europe with Malkmus and company; on Saturday they'll be headlining, for free, the annual Siren Music Festival in Coney Island. We caught the Portland-based Weiss for a few minutes earlier in the week as she was about to board her flight east.

So you’re at the airport? Yeah, we have two shows before Siren. We’re playing in Toronto and somewhere in Montreal.

How is the touring with the Jicks going? Great! We’re touring a lot more than I thought and I’m very happy about it.

So you like playing live? I love playing live. It’s rewarding when you make the record and then actually get to go out and support it, you know? The only real time you get a sense of whether people like it or don’t like it is when you play live. Because your friends will all tell you they like it. But when you play live you can tell by people’s faces.

I like the new album a lot. Thanks! And you’re not even my friend!

I saw all three shows last time you were in New York. At the last one at the Music Hall of Williamsburg Stephen introduced you as Joanna. [Laughs] He’s kind of like a crazy parent; he’s always calling me Joanna. A lot of people call us Joannet. It’s like we’re sisters.

Has your presence in the band brought new or different fans? Maybe a few. It’s not noticeable on any sort of grand scale but I hope so. I hope a few more ladies are coming on over to see the Jicks now. There are a lot of dudes in the audience.

Tell me about it. There’s nothing wrong with that. But it’s different from what I’m used to, certainly.

Do you miss doing the kind of percussion you used to do with Sleater-Kinney? Sometimes. I do miss being in a complete sweat when I’m done playing. But I loved playing in that band so much it would be unusual not to miss it. I miss those fans; I miss that sort of amped-up energy level. But I play a lot of stuff that I love in the Jicks that I didn’t get to play in Sleater-Kinney, and there’s no one band that encompasses all of your abilities. That’s why I always like to be in a few bands. I’m not very monogamous in the band world.

Who else are you with now?
Just Quasi and the Jicks. But the Jicks have been taking up most of my time recently.

You were just abroad with Malkmus and the Jicks, right? Yes, we were in Europe for a couple weeks.

How was that for you? There’s a sort of carefree nature in Europe because you don’t know anybody there and you just throw caution to the wind. And you are really, really tired most of the time. Sometimes there are surprises that happen out of sheer exhaustion and being out of it.

For instance? I can honestly say that Steve surprises me once a day, sometimes offstage and sometimes onstage. And I can’t be more specific than that, but there are a lot of surprises hanging out with that guy – either some new move he does on stage or something he plays I’ve never heard him play before. He’s very unscripted in a lot of ways.

Are you guys working on any new material? There are a bunch of new songs but they’re all in the embryonic stage. We’ve been playing a couple of them live. I’m not sure about Siren but we’ll probably play at least one, maybe two new songs. We have a tour in October so by then I think we’ll have six or seven new ones.

Malkmus told me you’re the person in charge of the set list. That’s true. I make the set list these days – with help, of course. No one is really that interested in doing it! [Laughs]

So what’s your process? It depends. If it’s a big show I can be thinking about it days in advance. I dream about it sometimes – like what we’re going to start with. I’m really into it for some reason! But usually I’ll make it after soundcheck because then you get to kind of feel what the stage is like. Some songs translate better on different kinds of stages.

What about the stage at Coney Island? Any dreams about that set list? Not yet. But I do think at outdoor shows you have to play the hits. And sometimes the faster, really aggressive stuff doesn’t work as well outside. But we’ll see. I haven’t decided yet. We’ll have to see how the first two shows go and what’s sounding good. The new songs could appear; they have an outdoor feel to them.

And how is life in Portland; is it easy for you to blend in or are you kind of regarded as a big star when you go out? No. I don’t believe so. Unless I’m wearing my rainbow afro wig. Portland is very down to earth for the most part, though there definitely is more of a fancy vibe creeping in there. But everyone is pretty cool; they’re a bunch of cool cucumbers and no one makes a big deal out of someone who’s been in a band. Most people who are going to come up to me are just going to say, “I like your music” and “Thanks.” They’re usually very brief and respectful. I don’t mind that at all; it’s worth knowing that someone was touched by what you did in some way.

What Portland bands are you into? I love the band Blitzen Trapper, who we’re going on tour with October. They just made a new record and it’s great. I don’t think it’s out yet. It’s really, really good. That’s the advantage – I get the record before anyone else. I do milk that because I know other musicians and get to mooch the record early. We also just toured with The Joggers.

I love The Joggers immensely. I do too. I hope they keep going. It’s hard, you know. You make a record and… I don’t know. They all have to work and there’s no one to put out the next record. I really want them to find a label because I think they’re just a great band and unique. There are not a lot of bands like that.

I feel like if they lived in New York where you can spit and hit a blogger and they played a lot of local gigs they’d be huge by now. Yeah, I mean they’re just so good. And so loveable when you see them live. We had a great tour with them.

I think they should quit their jobs and move to New York. [Laughs.] I’ll tell them you said that.