In what will surely be explained off as performance art or eventually in a NY Times long read, James Franco tried to pick up a 17-year-old girl via Instagram. Following his Of Mice Or Men performance on Broadway, a fan named Lucy took a video and photos of him outside the theater, and he asked her to tag him in it. 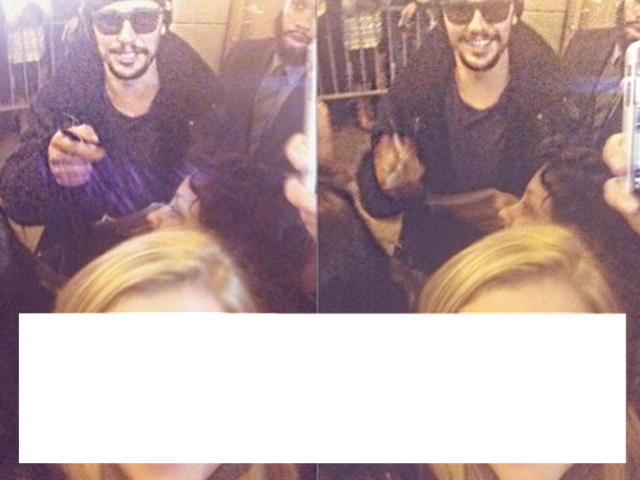 She did, and Franco started following her, and direct messaged her a bedroom-eyes-selfie. In the DM they had this little conversation: "How long will you be in New York?" he asked, "um a few days it's my 18th birthday present," she replied. He then rattled off more questions: "You're 18? Who are you with? Do you have a bf?"

Lucy responded that she was "nearly 18," and visiting NYC with her mom." The two also texted, and he asked what hotel she was in—"should I rent a room?" He sent her another selfie over text to prove it was him, adding—"It's me. Yes or no? Tomorrow or thurs?" Eventually she replied: "I'll come back when I'm 18." However, she then added, "One second, I will meet you if you write my name on a piece of paper then send it to me with your face also in the picture."

He did, and THEN WHAT? It's believed the two did not meet—instead, their brief interaction landed on Reddit. 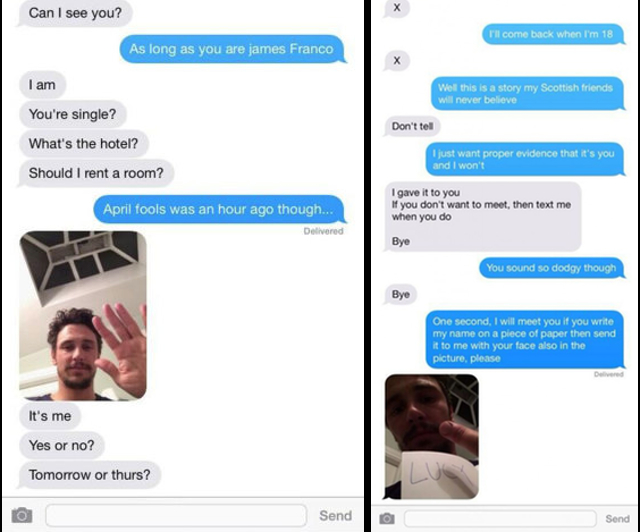 As for Franco, he temporarily changed his Instagram name to say: "PLEASE DON'T DM IF YOU ARE UNDER 18, THANK YOU." He also Tweeted, "I HOPE PARENTS KEEP THEIR TEENS AWAY FROM ME. Thank you," and included a link to an Instagram which has since been deleted. A little tip for anyone using Instagram: anyone can see who you follow (we can see that Lucy, for example, has stopped following James). So for those using Instagram to curate their own personal feed of cleavage shots, or as a pick-up place (as Franco seems to be)... well, you may not want to follow so many young women: 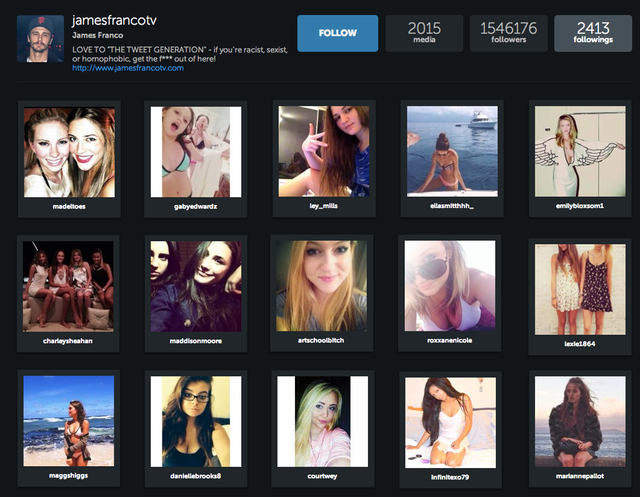 Jezebel quips that "maybe this is some kind of performative viral marketing campaign for his upcoming movie about a teenager who falls in love with her school's football coach"... and while that is HIGHLY unlikely, somewhere there's probably a PR team tirelessly working to make it so. [via Dlisted]