New Yorkers had varying reactions to Tilda Swinton's surprise performance art piece at MoMA on Saturday—on a scale of David Blaine to Marina Abramović, we thought she swayed more toward the latter. And amateur Renaissance Man James Franco certainly didn't want to miss out on the event of the day—he showed up just before closing time (with Michael Stipe!) to check out sleeping Swinton, as you can see in the grainy photo sent by a tipster below. 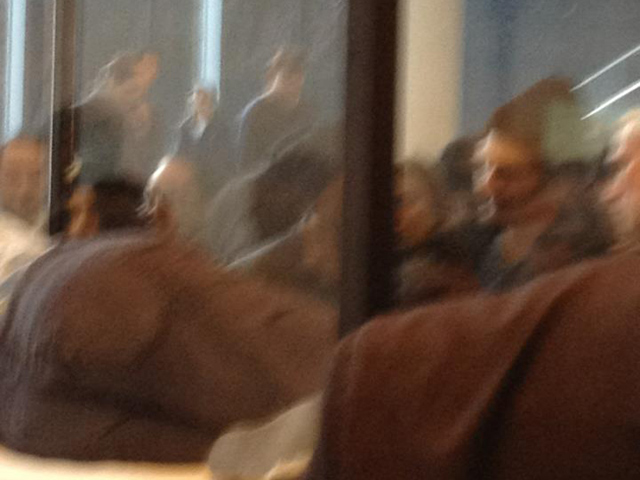 Plenty of people noticed him noticing her there as well:

Tilda Swinton is in a glass case @moma and James Franco & Michael Stipe are looking on. Just a Sat. Afternoon in NYC.

watching Tilda Swinton sleep in a glass box at the MoMa. James Franco is next to me also watching her sleep.

Looking at James Franco looking at Tilda Swinton as art

At MoMA, where Tilda Swinton is sleeping in a glass box: RT @dordotson: Of course James Franco is here. Of course he got in my elevator.

Tilda was sleeping. James Franco was a part of the crowd staring. This is amazing sh*t. Made it JUST before the museum closed!! #TheMaybe

This all seemed entirely appropriate, considering the fact that throughout the day, people were finally able to dump their Franco/Swinton jokes onto Twitter— about how maybe Swinton was really Franco in disguise, or how he should join her in the box, or how he was probably kicking himself for not thinking of this first, or how he'll probably copy her idea later.

Whether or not you think Franco's grillz-as-pathos shtick is brilliant or just the equivalent of a limited edition switchblade party, it's always more admirable to be interested and engaged in the art world, and supportive of people taking risks (regardless of whether you think said attemps are "a cheap attempt at modern art"), than not. And hey, Franco certainly makes for a good addition to the city's current hottest nightclub.

#art
#james franco
#moma
#museum
#napping
#sleeping
#tilda swinton
#twitter
#original
Do you know the scoop? Comment below or Send us a Tip