Ivo Van Hove Talks About Cries And Whispers At BAM

Ingmar Bergman’s critically acclaimed 1972 film Cries and Whispers, about a woman dying in the company of her helpless sisters, has been adapted into a multidisciplinary theatrical production by Ivo van Hove, the Flemmish director who enjoyed great success in New York and elsewhere with his radical re-imagining of familiar texts. His bold interpretations of plays such as Hedda Gabler, The Misanthrope, and Little Foxes have been hits in NYC, and in 2008 he staged a remarkable theatrical adaptation of John Cassavetes's wrenching film Opening Night. Van Hove is currently back at BAM with a vivid interpretation of another film, which opens tonight for a brief run of five performances as part of the Next Wave festival. Last week we met up with the director at an East Village cafe to talk about Cries and Whispers.

What is the genesis of this project? I did one Ingmar Bergman text before, Scenes from a Marriage, but that's more like a theater text. After he died—I'm very bad at years and dates—but it was 2007, I believe. At that point all the rights for Bergman's movie [scripts] became free. Nobody knew it, but I knew it! Before his death, that was not the case. Before his death you couldn't play, onstage, a film script by him. I asked several times and they always said, "No, no, no, no, no." After his death—it must have been in his will—it was open.

But Cries and Whispers was not my idea, it was my dramaturg, Peter van Kraaij. He came up with this idea and I was a little bit shocked because Cries and Whispers is my favorite Bergman movie. I thought, well, perhaps that's not such a great idea to do your favorite movie on stage. But at the same time I was tempted because—and it's a private story, but that's the way it is so why not tell it—in 2007 my father also died. So I really witnessed this whole process of dying; it was very close to me. I think it was also a little bit my kind of coming to terms with it, what it is, that you see your father—who was a man with a lot of strength, that you always had to look up to, a kind of Eugene O'Neill father you could say—that he became just like a nobody at the end. Physically nothing anymore. That of course became, for me, the really important thing is this production: to show as real as possible—I don't mean real reality—but as real as possible, what it is to be somebody who is dying and what it does with the people around this person.

And that of course is what this text is about. It's about this one woman who is in total pain, the whole day almost, and she is dying and her sisters come for the last days or weeks, they don't know exactly, to be with her. And then there's this beautiful text by Ingmar Bergman, that says more in between the lines than in the lines. When we first read it, it was only 40 minutes, there's almost no text, but there's a lot happening in between the text. A lot happening between these people. The beauty of it is that this woman who is dying, she's calm. She is not ready to die, but she knows it's a fact and she accepts it somehow. That made it, for me, possible.

Then I began to study the text, because there's no film script. Bergman only wrote a letter—well, a letter of 40 pages or something—to his actors about what he thought the film should be. He writes the dialogue but not as dialogues, it's almost like a little novel. It's an interesting novel, and there were a lot of discoveries for me. One that became the main discovery is that the person who is dying is an artist, but in the movie, he doesn't show that a lot, and that became, for us, the central thing. A person who is dying who is also an artist, so she expresses herself through her art because she is not married—all her sisters are married, but not happily married—but she's not married and she lives in her art and through her art. 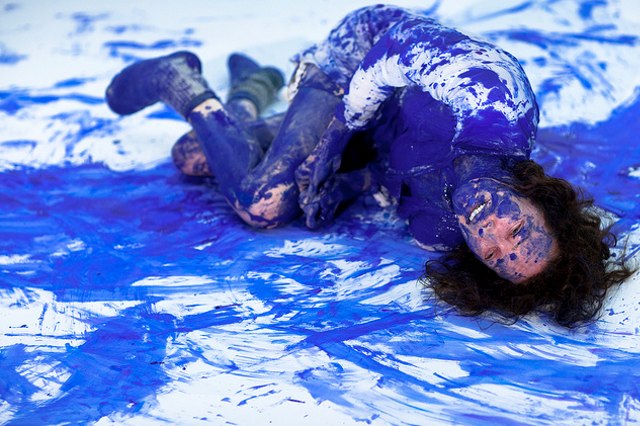 In your version, the woman who's dying is a video artist. Yes, in the novel she is keeping diaries and it's not very clear. She paints? It's not very clear. For me, also—but I shouldn't tell too much about it—the scene where she really dies is like performance, like a last expression of what she has been in life and what she thinks about life. But that's so beautiful, that all these other women, who seem to have perfect lives, marriages, they are really unhappy. And the one who should be unhappy, because she's dying, she is actually happy because she has—well, that's what the play is about, and what the text of Ingmar Bergman is about—it's about existence. What does it mean to be in the world? What does it mean in the end? What's the meaning of it all? Agnes, who is the person who is dying, she has found the meaning of this life, of being here. The other ones, they are still fighting with themselves, with their husbands, and it continues Stringbergian terrible world.

Did you find yourself thinking more about mortality when you were working on this? Yes of course, but I had experienced it. My father... it was a very slow process of dying, six, seven years, so I witnessed it all the time. My brother came to opening night with my mother and my mother said, "Oh, beautiful production!" And my brother said to me, whispering in my ear, "I recognized a lot." My mother just ignored it. I just knew, because she was still in mourning. But that's my personal story. I'm telling it now, I don't talk a lot about this, but that was actually my personal thing to do it. For the audience, they don't know my father, they don't know my story, and it should not be important. The production is there. What I wanted is to have them really feel what it is to die. What it physically is. That there is happiness, there is sadness, there is pain. There are all these things and I wanted to show it. Not like a documentary, because you cannot do it, but in a poetic way I hope. 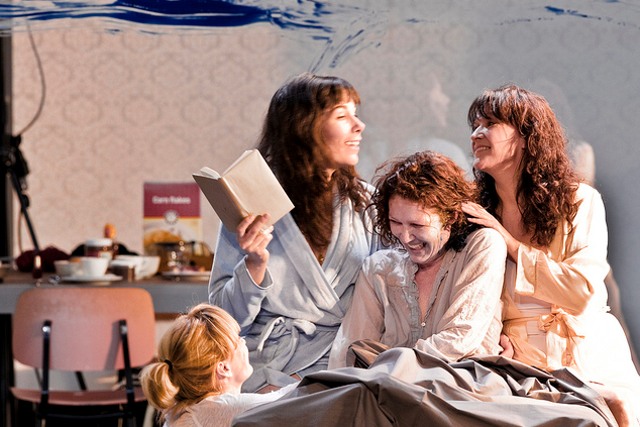 Do you think people in Europe are more comfortable thinking about death than in America? No, we are all afraid of it, we don't want to see it on stage. But in this production, people accepted it, but that's really Ingmar Bergman. He is so humane and so humanistic about people. He is never judgmental, even when people behave in the most awkward, terrible, violent, vicious way, he always gives comfort... I think dying is still a taboo, something that we have a hard time dealing with, and Ingmar Bergman does it in this text in a very realistic, a very hard and very vulnerable at the same time. That's what so beautiful about it, I think.

We have a very long scene that's not in the movie. It plays for 12 minutes and not one word is said and it's only—I don't know it in English—when somebody has died and they lay off the person and the process of cleaning somebody and washing somebody and preparing him for a funeral. I don't know really the technical word for it.

Embalming maybe? Probably. So we do that. It's not in the movie but it's 12 minutes in the middle of the play. For me, all these rituals are very important. I wanted to take death seriously on stage for once, because dying onstage is always very ordinary, banal. It's never believable. I hope to make it believable, that you can believe what's happening on stage. That was my goal, that was my challenge.

Do you see much theater when you're here in New York? No. Movies! I used to see a lot, but no. But now I'm going, for instance, to King Lear on Sunday, I want to see that. James Macdonald is a director I really respect, and to see Sam Waterston in that role. And I also worked with John Douglas Thompson in Hedda Gabler, he played Brack. So I'm going to see that production. I would like to see the Elevator Repair Service: great group of artists. So now and then I go, but not too often.

You work with film a lot. Film scripts, movie scripts.

But also with video on stage. Does this production use more of that because it's about a video artist? Yes, but that's because she is working on her art even when she's sick. It's like authors that are dying, they always write until the last moment, they try to do that. So that's what we do. We only use it as her work of art. Everything that you see is her work, is her art, and that's what we developed during the production. I use video always in a different way but always when it is a necessity, not just because it's fancy or modern. In this case it's the artist's work on stage.

And it's only here for five performances. Do you know what your next production in New York will be? I know but I don't know if I can say. It will be at BAM also and it will be a big one. The biggest production I've ever done. It will be next year in the Next Wave festival. I'm talking of course to Jim Nicola [of the New York Theater Workshop] about a new production. I have some other things, which I cannot talk about really. I love New York and I've worked here since 1996, and I know so many great actors. I really love to work with American actors because they bring something different from European actors. We know they don't earn money here, so the necessity for them to do something really good is even greater than it is in Europe. They have a huge capacity for psychological theater but push it further. They take their jobs so seriously.

#cries and whispers
#ingmar bergman
#ivo van hove
Do you know the scoop? Comment below or Send us a Tip