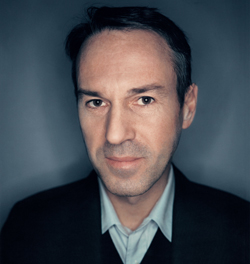 John Cassavetes's wrenching film Opening Night, released in 1977, stars Gena Rowlands as a famous actress who becomes increasingly unhinged after seeing a young autograph hound hit by a car outside the theater where she's starring in a Broadway-bound play. Acclaimed Flemish director Ivo van Hove—whose bold interpretations of plays like Hedda Gabler and The Misanthrope have been hits in NYC—has crafted a large-scale theatrical adaptation of Cassavetes's award-winning film.

The multidisciplinary production, featuring live video and onstage seating, was created with Holland's prime theatre company, the Toneelgroep Amsterdam, and will have its U.S. premiere tonight at BAM as part of the 2008 Next Wave Festival. In reviewing Opening Night, the Netherlands’ De Telegraaf wrote, “Ivo van Hove ferrets humour and drama out of the colliding egos of the theatrical personalities and portrays the mysterious crooked ways of a creative process…Opening Night expresses that performing is not only a way of living, it is also a way of surviving.” Before the final performance Saturday night, van Hove will talk about his work with playwright Charles Mee.

So why did you decide to present Opening Night in a theatrical setting? I must admit I didn't know the movie; I never saw it. I was going to produce another movie by Cassavetes called Husbands. I became really obsessed by it, but I couldn't get the rights to that movie. But I had a very good relationship with the person who controls the rights to his films, because I did Faces in '97. He said propose something else, and then a friend of mine came up with this movie and said, "Here's something for you, Ivo." So I read the script; that's what I did, I never looked at the movie, I just read the script. I thought it was a wonderful story about this woman's extensive crisis on one level; on the other level, it's also about theatre, and the great texture of the theatre community, this great family who is focused on the well-being of their star. It's a family tragedy in that way.

So just to make sure I understand you correctly, you have not seen the film Opening Night? No, I have not.

Why are you not interested in seeing this movie? I am very interested, of course, but when I direct a theater play I don't think it's necessary. Cassavetes starts with his own text to make his movie, and I also started from the text to create this play. I think it's a normal thing to do. When I do Hamlet, I'm not going to look at Peter Brook's version. I look to be inspired from the text.

So it's not necessary for people to have seen the film before seeing your version? No, no, no. It's just a great story, a great text... It's so well-written; it's a great text in itself. 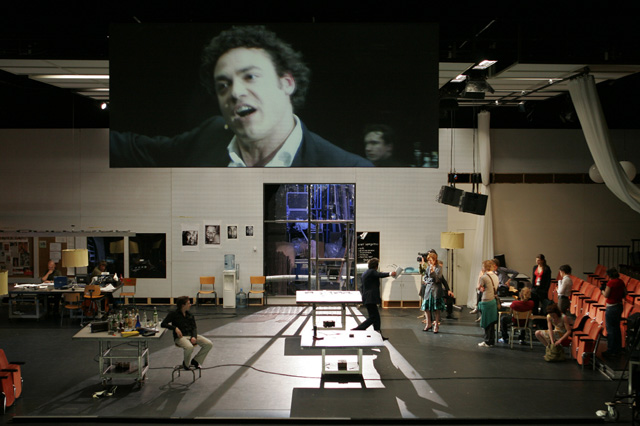 Have you heard responses from people who have seen the film? Of course. Actually, this very famous film professor, Ray Carney, came to see it in Amsterdam and gave a lecture. He was surprised that it translates so easily to the stage. He was also surprised at the differences between Cassavetes's version and mine. And most of the people who have seen the play have also seen the movie, and they seem to appreciate this second version of it. They ask what its about, and that's what works so well.

Do you plan on ever seeing the movie? Yes, of course. It's just that I didn't feel like doing it while I was rehearsing it, and then after that I just didn't have time. I've seen little sections of it, and I've seen a documentary about John Cassavetes. I have seen a lot of Cassavetes's movies, when I was a boy actually, and I couldn't totally understand everything that they were talking about because I was very young at the time, and his films are about very complex, adult relationships. But I was attracted by the roughness of the film style, and also by the the emotional quality of the actors. It's an old love, you could say.

Gena Rowlands starred in the movie; did your lead actress study her performance? We never talked about that; I am going from the script and we work from that. And when you play a character you always play yourself a little bit. Imitation is the most boring thing you can do in life.

You stage your work all over the world and in New York your productions have been particularly well-received. How would you compare the New York theater world with other cities around the world? For me, I'm in love with New York. I have a studio there, and spend a lot of my free time in New York. I love it, I totally adore it. I just came from Paris and I know that many Americans are in love with Paris but I think it's nothing compared to New York. I think New York is really a good place to be. I know that the theater world is a little bit difficult now because Broadway produces more and more musicals over the years and less and less theater plays, which is a pity of course. The most interesting work is happening in the off Broadway theaters. But New York is still the city that inspires artists all over the world, and will still inspire them for decades and decades to go.

What productions have you seen in New York that have really impressed you? I love the Wooster Group. I also like Elevator Repair Service a lot. I love the work of Richard Maxwell; I adore his play House, which is almost ten years old now. But it's such a universal play, it can be performed in Shanghai, in Amsterdam, in New York City and still mean something to people everywhere. So Richard Maxwell is really just a great artist...Just to name a few. There are more of them of course.

I think a lot of interesting artists are living in New York, and I think that really changes their art. When you see people like Peter Sellars have to come to Europe to get their work seen, that's really a pity. I think it's also because there are no subsidies in America, so you are totally dependent on economics. Economics ruin art...It's always very difficult, that combination, I think.

After this, what will be your next production staged in NYC? I don't know. I'm talking to James [Nicola] at New York Theater Workshop and may perhaps direct something there next season or the season after. So we'll see. And of course, I have different conversations going on with other producers. I remade a version of Angels in America last year. And that would be my dream, to bring that to America, because it is really the greatest American piece of the last century. I think it's a wonderful, universal play, and I think it would be interesting to do it now, because it's a bit of a hidden play now because it's so connected with the eighties and the nineties, with AIDS. We have distance now, and can see it's a really great American contemporary play. A classic play. I would love to bring my production with my actors. Perhaps—you never know what will happen.

#bam
#cassavetes
#interview
#ivo van hove
#next wave
#opening night
Do you know the scoop? Send us a Tip