It's Time To Bring Back Baby Cages

Space is at a premium in New York City—the rich are getting richer, buying up the luxury pieds-à-terre for the day when Donna the purebred Saluki eventually desires her own home. Desperate Brooklynites are stashing their babies next to the unused square foot adjacent to the toilet brush to stave off the inevitable pulling up of stakes for scenic Guttenberg. But a bathroom is nowhere to raise a baby. Babies should be raised in their natural habitat—in cages, dangling outside the living room window.

First, let's address the question of what baby cages are. They are cages, just like the kind in which you store song birds and ultimate fighters. Your baby may well grow up to be a song bird or an ultimate fighter, but these cages are specifically designed for babies, and won't contain any foreign objects you didn't decide to put in there yourself.

Where do baby cages go? They hang outside of your window, right where you'd normally put your A.C. I know you're going to miss having A.C., especially in the summer, but perhaps you should have considered that before you decided to have a baby, hmm? Life is full of difficult decisions: You may have either a baby, or you may have a cool, climate controlled home. You may not have both. (It has been pointed out to me that some New Yorkers have two windows in their apartments. Congratulations, Mr. and Mrs. Rockefeller. If you can afford two windows, you can surely afford a separate playroom for little Andronicus.) 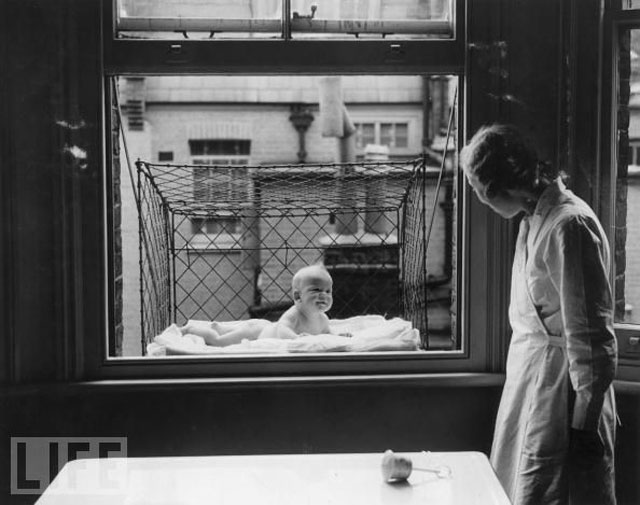 Why do you need a baby cage? The Gothamist staff enjoyed a prolonged discussion exploring the potential hazards of putting your progeny in a cage—exposure to the elements, like bird poop and UV rays, were the only legitimate risks yielded by several minutes of concentrated thought. Associate Editor Ben Yakas expressed concern that "someone would throw peanuts at it." No members of the Gothamist staff present today have children. 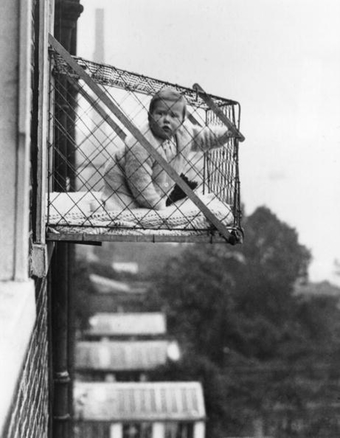 Baby cages are largely derided as a "stupid idea," and yet, there seems to be nothing stupid about them. Putting your baby in the bathroom? Stupid idea. The Clorox goes there, among other potentially harmful entities, like drunk teens making out. No one is arguing that your baby should be free to roam its cage during a blizzard or sand storm. Prepare your baby for its outdoor adventure the same way you would prepare for it a trip to the park. (A good balaklava, flak jacket, emergency-use grenade.)

The concept was first introduced in the 1890s by one Dr. Luther Emmett, who wrote about baby cages in his book, The Care and Feeding of Children. He argued that babies should be "aired," (yes, like old hiking boots) in order to preserve their health. He has a lot of rules on the airing out of babies:

"Fresh air is required to renew and purify the blood, and this is just as necessary for health and growth as proper food," he wrote. "The appetite is improved, the digestion is better, the cheeks become red, and all signs of health are seen.

"There are no real objections," he went on. "It is not true that infants take cold more easily when asleep than awake, while it is almost invariably the case that those who sleep out of doors are stronger children and less prone to take cold than others."

#baby cages
#good ideas
#original
Do you know the scoop? Comment below or Send us a Tip