It's So Hot We're Going Into The Subway To Cool Down

First, let's get the mandatory stock phrase out out of the way—New Yorkers are trying every fathomable way to beat the heat today, boiling their brains to cook up new methods of cooling down and staying cool on this Wednesday that is two accidents away from a dystopian global warming sci-fi movie of 2025. As Bob Dylan once famously said, "You don't need a weatherman to know which way the sun boils your skin or how many spare T-shirts to bring with you when you walk to the deli down the block."

We bought a very Scientific and Precise thermometer at the hardware shop for $7.55 and went underground with you, the People, to see how hot those platforms were getting. Science says: Not as hot as actual Earth. 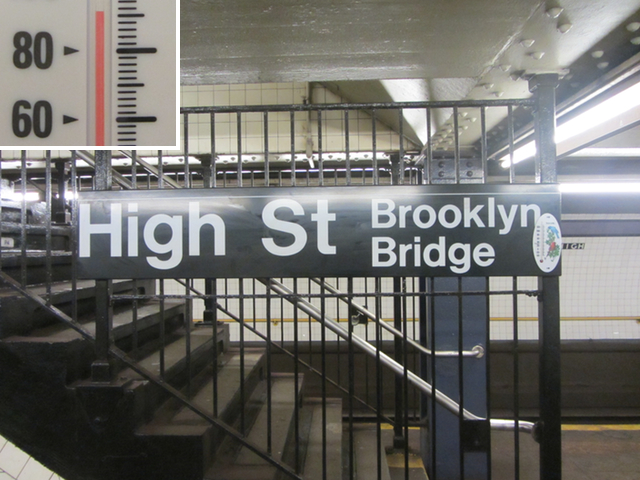 We left the cool, dark cave of the Gothamist Offices for two platforms around DUMBO: The High Street - Brooklyn Bridge A/C station and the York Street F station. 20 seconds the sweat begins. The temperature outside clocked in at almost 100°F.

The A/C line platform was breezy and cool—which is the opposite of outside's stagnant and humid. The trains created a near constant air flow that was like a giant fan—and the air didn't smell half bad! The thermometer down under hovered around a pretty chill 92°F (factor in the breeze and you practically have an Ice Bar). One Liz Cole was waiting to catch her train and didn't seem to be sweating all that much so we asked what her secret was. "Water." Sometimes, "a newspaper" for a fan. High Street ain't so bad, but the Franklin Avenue stop and Eastern Parkway area gets pretty heated, she told us.

Steve S. was hanging around the station as well and looked to just be enjoying his lunch in no particular rush. At High Street, there's usually "a pretty good breeze [probably because of] more trains." Tricks to stay cool? "A cold drink." "This is not bad. West 4th street, 59th Columbus Circle, 42nd Street Times Square [are] usually pretty bad." Ultimately though he, like most, can do little: "I just sweat it out." 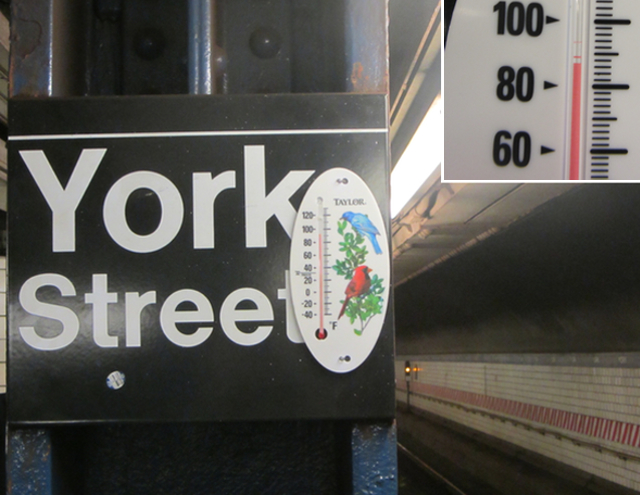 Over at the York Street stop, things were pretty cool as well! Science was telling us that this station was even cooler, registering a temperature of around 88°F. The two lines above the rest of the mercury were confusing though, as was the abnormally low temp, but we're positive it had absolutely nothing to do with dropping the thermometer on the ground. Two NYPD officers just happened to be at the York Street station, so I had to grill them. We asked them how they manage the boiling temperatures: "We suffer just like you," they told us, "maybe even worse" considering the gear and uniform. They go out on patrol and "just have to deal with it." What about a handkerchief? "Doesn't help."

The stations have a few things in common: both are at the end of long tunnels that run deep under the East River, both have just two tracks, both are further underground than most, and have pretty frequent trains. All that creates a cool and wind-tunnel-y Deep Earth respite from the solar flares.

In conclusion: deep underground by the river's edge is where you belong. Those who wish to survive—or even prosper—will press further into the darkness, earning the respect of the subway rats along the way until you can benevolently rule over them as Rat-King/Queen atop your steam-fitted throne until next Monday-ish.

#heatwave
#subway
#temperature
#original
Do you know the scoop? Comment below or Send us a Tip