It's Official: Xanadu's a Do! 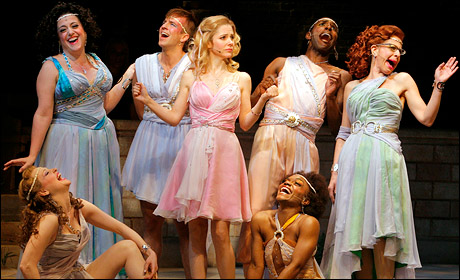 New York Times managing editor Jill Abramson drew fire in March after her heated dinner party spat with playwright David Hare, in which she reportedly broke it down for Hare thusly: “We are the central arbiter of taste and culture in the city of New York.” Imperious but true. The Times draws a lot of water in this town when it comes to theater; and when there’s big money on the line they are now the dominant factor in determining whether a new production lives or dies.

So the plucky young money men (and woman) behind the new Broadway musical Xanadu must be rolling on air after the review handed down from on high by the Times’s Charles Isherwood. Theater bloggers who love to dis the Ish won’t be surprised to learn that in the case of this ready-to-eat-treat, the two-sided coin that is Isherwood landed on laudatory, not lacerating. Pull-quote to displace Xanadu’s Perez Hilton endorsement on the marquee: “Heaven on wheels.”

We did the ‘du last week; we’d been looking forward to it for some time despite having never seen the notoriously dreadful Olivia Newton-John movie musical from 1980. With roller skates and music by E.L.O., the stage adaptation seemed like a crazy idea that might just be bad enough to work. Indeed, on the night we attended, a packed house of howling Xanadists gleefully reveled in every obscure nod to the source material, reminding us once again that there is a cult following for everything.

While we weren’t unequivocally thrilled with the entire campy cup of Kool-Aid, we must admit that the fast-paced, intermission-less evening kept the laughs rolling fast enough to make a virtue of the vacuous story. All in all, Xanadu’s a just-fun-enough romp with an irresistibly talented cast. The cheap one-liners in Douglas Carter Beane’s tongue-in-cheek book do outweigh the funny stuff; be prepared to wince often as the crowd roars at such tired ripostes as, “Oh no, he didn’t!” and “Oh, snappeth!” But Beane redeems himself again and again with a shrewd, deconstructive style; one of the biggest laughs of the night comes near the end when Zeus, the central arbiter of taste in the universe, prophecies a nightmarish future in which “creativity shall remain stymied for decades. The theater? They’ll just take some stinkeroo movie or some songwriter’s catalog, throw it onstage and call it a show.”