It's Been 10 Years, Time To Revisit The Strokes' Is This It 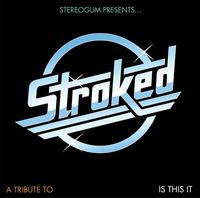 The Strokes‘ debut album Is This It was released on July 30th, 2001, when we were all... so much younger. For the 10 year anniversary, Stereogum is revisiting the album with a tribute called Stoked: A Tribute to This Is It. (They've done this in the past with Bjork's Post, R.E.M.’s Automatic For The People, and Radiohead's Ok Computer.) Download it here for free—the redux features covers from Chelsea Wolfe, Austra, Deradoorian, Frankie Rose, Owen Pallett, Himanshu "Heems" Suri of Das Racist, and more.

Heems is the only one who changed the lyrics, to the song "New York City Cops"—the reimagined version now goes something like this: "Fuck the police, fuck the NYPD... fuck the New York Pricks and Dicks. They're the worst people, New York cops are the worst." It's a lot better than the original, which was never really a strong point on the album. The notes for the album include this explanation from Heems:

Stereogum also revisits the album's original release in 2001, saying, "it helped not only put contemporary New York City in the forefront of music lovers’ minds, it offered an easy reference for people to dig backwards into the Big Apple’s rock ‘n’ roll past. For certain younger fans, it was maybe the first time they carefully considered Television (the late ’70s), the Velvet Underground (mid ’60s to early ’70s), and other lesser known garage and rock and whatever bands that inhabited a dirtier, grubbier Manhattan. Is This It was a history lesson, but one with enough new ideas to also offer a roadmap." We're gonna go to the Darkroom and listen to Interpol now.

#10 years
#album
#download
#Is This It
#mp3s
#The Strokes
#tribute
Do you know the scoop? Comment below or Send us a Tip